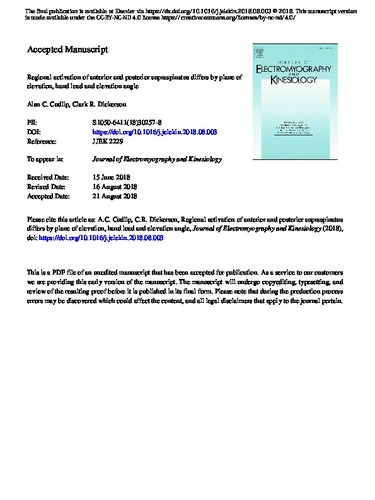 The supraspinatus is one of the muscles of the rotator cuff, and growing research on fibre type composition and mechanical advantages in specific postures suggest this muscle may have distinct anterior and posterior regions. Activation differences between these regions may identify important functional differences. This research quantified muscular activation of these regions throughout a range of motion with differing hand loads. Forty participants completed paced humeral elevations in 7 planes of elevation (0/15/30/40/60/75/90°) using 3 hand loads (unloaded arm/20%/40% maximal elevation strength). Indwelling electromyography collected muscle activity of the anterior and posterior supraspinatus. Hand load and elevation angle interacted to affect activity of the anterior supraspinatus in most planes of elevation - by up to 41 %MVC (p < 0.01), but in few planes for the posterior region. Plane of elevation influenced anterior and posterior region activation by up to 17 %MVC and 13 %MVC, respectively (p < 0.01). Increasing hand loads increased activation in both regions (p < 0.01), but more so for the anterior region. These differences may indicate differences in function between the two regions. The sustained activation in the smaller posterior supraspinatus may indicate this region as primarily a glenohumeral stabilizer, while the larger anterior region acts to achieve glenohumeral motion.