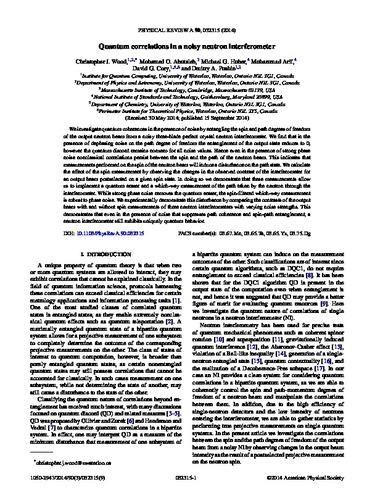 We investigate quantum coherences in the presence of noise by entangling the spin and path degrees of freedom of the output neutron beam from a noisy three-blade perfect crystal neutron interferometer. We find that in the presence of dephasing noise on the path degree of freedom the entanglement of the output state reduces to 0, however the quantum discord remains nonzero for all noise values. Hence even in the presence of strong phase noise nonclassical correlations persist between the spin and the path of the neutron beam. This indicates that measurements performed on the spin of the neutron beam will induce a disturbance on the path state. We calculate the effect of the spin measurement by observing the changes in the observed contrast of the interferometer for an output beam postselected on a given spin state. In doing so we demonstrate that these measurements allow us to implement a quantum eraser and a which-way measurement of the path taken by the neutron through the interferometer. While strong phase noise removes the quantum eraser, the spin-filtered which-way measurement is robust to phase noise. We experimentally demonstrate this disturbance by comparing the contrasts of the output beam with and without spin measurements of three neutron interferometers with varying noise strengths. This demonstrates that even in the presence of noise that suppresses path coherence and spin-path entanglement, a neutron interferometer still exhibits uniquely quantum behavior.