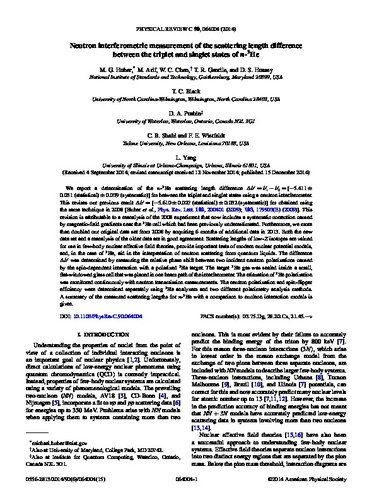 We report a determination of the n-He-3 scattering length difference = b = = b = 1 -b = 0 = [-5.411 = 0.031 (statistical) = 0.039 (systematic)] fm between the triplet and singlet states using a neutron interferometer. This revises our previous result = b = = [-5.610 = 0.027 (statistical) = 0.032 (systematic)] fm obtained using the same technique in 2008 [ Huber et al., Phys. Rev. Lett. 102, 200401 (2009);,103, 179903(E) (2009)]. This revision is attributable to a reanalysis of the 2008 experiment that now includes a systematic correction caused by magnetic-field gradients near the 3He cell which had been previously underestimated. Furthermore, we more than doubled our original data set from 2008 by acquiring 6 months of additional data in 2013. Both the new data set and a reanalysis of the older data are in good agreement. Scattering lengths of low-Z isotopes are valued for use in few-body nuclear effective field theories, provide important tests of modern nuclear potential models, and, in the case of 3He, aid in the interpretation of neutron scattering from quantum liquids. The difference = b = was determined by measuring the relative phase shift between two incident neutron polarizations caused by the spin-dependent interaction with a polarized 3He target. The target 3He gas was sealed inside a small, flat-windowed glass cell thatwas placed in one beam path of the interferometer. The relaxation of 3He polarization was monitored continuously with neutron transmission measurements. The neutron polarization and spin-flipper efficiency were determined separately using 3He analyzers and two different polarimetry analysis methods. A summary of the measured scattering lengths for n-3He with a comparison to nucleon interaction models is given.