Injection and Separation Evaluation for Microfluidic Protein and DNA Separation 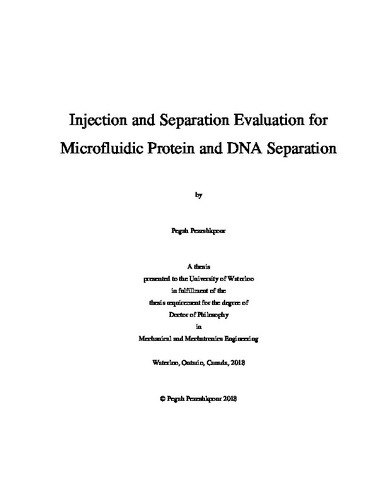 Electrophoresis is the separation of charged particles under an applied electric field and is applied for macromolecules such as DNA, proteins, RNA and peptides through a solvent. It has been one of the most widely used analytical separation techniques since the early 1900s. Traditionally, capillary zone electrophoresis and gel electrophoresis have been used in laboratories, however, with the advent of the Lab-on-a-Chip (LOC) and the Micro Total Analysis System (𝜇TAS) concepts in the early 1990s, the focus has been on shrinking the entire laboratory with all its functions onto a microchip. The miniaturization of traditional, cumbersome laboratory equipment onto microchip devices offers the potential for decreased analysis times, reduced sample volumes, reduced operating and manufacturing costs, as well as portability. However, such downsizing necessitates a fundamental study of microscale fluid transport, microchip design, channel geometries, and sample manipulation and detection methods. This thesis reports theoretical and numerical investigations into microfluidic transport in protein and DNA separation. The thesis begins with a background chapter about electrophoresis, reviewing the fundamentals concepts of operation in microchannels. Different chip designs and electric potential configurations are discussed as well as the concepts of electroosmotic and electrophoretic velocities, diffusivity, and separation resolution. Next, the dimensional problem formulation is provided for a basic cross-linked chip, including an injection and a separation channel by assuming slip boundary conditions on the channel walls. This assumption is made after considering the details of the ion distribution in the electric double layer (EDL) adjacent to the walls as provided by the detailed derivation of the Poisson-Boltzmann equation from a statistical approach as presented in Appendix A. The non-dimensional formulation of the problem, as determined in Appendix B, was used to guide the numerical simulations and further analysis, using two numerical tools: Ansys CFX 15.0 and Matlab R2017. With the significant role that sample plug shape and size play, with regard to separation, the quality of the sample was investigated. A model was developed for evaluating the sample shape and size at the intersection of the injection and separation channels of cross-linked microchannels. A shape factor was developed to quantify the sample plug shape and size. A variety of sample plug shapes was analyzed and criteria to assess the sample plug were identified. Higher quality sample plugs result in increased separation resolution and this is predominantly possible when a rectangular sample plug is achieved at injection. A new definition of the separation resolution was developed which considers the detector sensitivity and the peak-to-valley magnitude of the sample species concentration. In the conventional definition of resolution, a significant distance between the adjacent peaks of concentration graphs, relative to the sum of peak half-widths, represents good separation. However, such a definition ignores the drop from the initial sample concentration, which plays a significant role in identification of sample peaks. Therefore, a new factor, the ratio of peak-to-valley magnitude to the detector sensitivity, is introduced. This modified resolution represents a clearer demonstration of resolving sample constituents and shows resolution improvement. The grid independence and validation studies were performed to validate the numerical predictions with results available in the literature. For the spatial grids, the grid at the 50𝑥50 𝜇𝑚2 cross, in the primary design, was examined from a coarse mesh of 10𝑥10 cells to 60𝑥60 cells. The results show that the numerical solution for three electric, flow and concentration fields are grid independent when the cross has 40𝑥40 mesh cells within 0.5% error, second order accuracy. For the transient concentration field, the time scale was examined from 0.01𝑠 to 0.0005𝑠. The solution was independent of the temporal step when the time step was 0.001𝑠 with 0.35%, first order accuracy. The spatial and temporal grid-independent results were validated with experimental results in the literature for the injection of a single constituent sample. The validation demonstrated the accuracy of the implemented numerical simulations and showed promising results for further analysis of injection and separation. Having established a confident numerical model, results are then presented providing more analysis for electric potential configurations at injection and separation. The basic geometry is modified to a new design with channels of equal lengths and a reduced width of the separation channel to 50% of that of the original. Further, it was discovered that under certain conditions a steady-state sample plug shape is formed at the cross; this revelation led to a two-step injection procedure that was subsequently implemented for injecting the sample plug to the separation channel. Different separation configurations are studied for this procedure and results show an improved separation resolution, by both the conventional and modified definitions. With the high quality sample achieved, the effect of potentials at the side reservoirs of separation channel was studied for separation. The results show increasing these potentials to 25%−40% of the driving potential for separation increases the resolution. Conclusions are drawn in the final chapter with regard to the contributions made and development activities taken during the course of this research. With the modified chip design including channels of equal lengths and a narrowed separation channel, and by implementing the two-step injection procedure, the ideal rectangular plug was achieved. The separation resolution was improved by the two-step process and thresholds of potential configurations at separation for achieving higher resolution were identified.