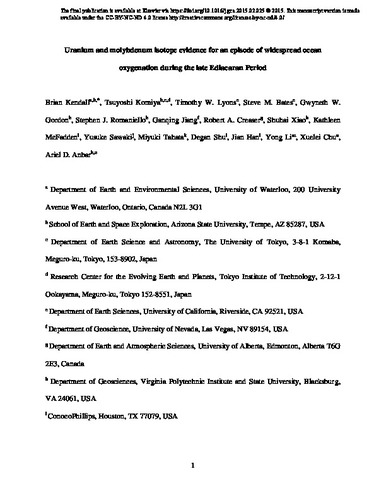 To improve estimates of the extent of ocean oxygenation during the late Ediacaran Period, we measured the U and Mo isotope compositions of euxinic (anoxic and sulfidic) organic-rich mudrocks (ORM) of Member IV, upper Doushantuo Formation, South China. The average d238U of most samples is 0.24 ± 0.16& (2SD; relative to standard CRM145), which is slightly higher than the average d238U of 0.02 ± 0.12& for restricted Black Sea (deep-water Unit I) euxinic sediments and is similar to a modeled d238U value of 0.2& for open ocean euxinic sediments in the modern well-oxygenated oceans. Because 238U is preferentially removed to euxinic sediments compared to 235U, expanded ocean anoxia will deplete seawater of 238U relative to 235U, ultimately leading to deposition of ORM with low d238U. Hence, the high d238U of Member IV ORM points to a common occurrence of extensive ocean oxygenation ca. 560 to 551 Myr ago. The Mo isotope composition of sediments deposited from strongly euxinic bottom waters ([H2S]aq >11 lM) either directly records the global seawater Mo isotope composition (if Mo removal from deep waters is quantitative) or represents a minimum value for seawater (if Mo removal is not quantitative). Near the top of Member IV, d98Mo approaches the modern seawater value of 2.34 ± 0.10&. High d98Mo points to widespread ocean oxygenation because the preferential removal of isotopically light Mo to sediments occurs to a greater extent in O2-rich compared to O2-deficient marine environments. However, the d98Mo value for most Member IV ORM is near 0&(relative to standard NIST SRM 3134 = 0.25&), suggesting extensive anoxia. The low d98Mo is at odds with the high Mo concentrations of Member IV ORM, which suggest a large seawater Mo inventory in well-oxygenated oceans, and the high d238U. Hence, we propose that the low d98Mo of most Member IV ORM was fractionated from contemporaneous seawater. Possible mechanisms driving this isotope fractionation include: (1) inadequate dissolved sulfide for quantitative thiomolybdate formation and capture of a seawater-like d98Mo signature in sediments or (2) delivery of isotopically light Mo to sediments via a particulate Fe–Mn oxyhydroxide shuttle. A compilation of Mo isotope data from euxinic ORM suggests that there were transient episodes of extensive ocean oxygenation that break up intervals of less oxygenated oceans during late Neoproterozoic and early Paleozoic time. Hence, Member IV does not capture irreversible deep ocean oxygenation. Instead, complex ocean redox variations likely marked the transition from O2-deficient Proterozoic oceans to widely oxygenated later Phanerozoic oceans.