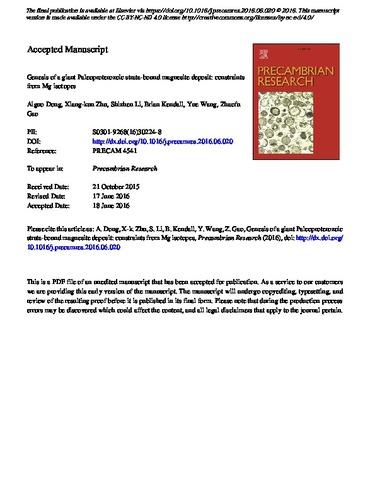 Giant strata-bound magnesite deposits are absent in modern and most Phanerozoic sedimentary environments but occur predominantly in Precambrian strata. These deposits may have formed directly through precipitation of evolved Mg-rich seawater in an evaporative shallow-marine setting or, alternatively, by epigenetic–hydrothermal replacement of the Mg-rich carbonate precursor. To test these hypotheses, we obtained the first Mg isotope data from the world’s largest strata-bound magnesite deposit belt, hosted by the ca. 2.1 Ga Dashiqiao Formation in Northeast China. The Mg isotope compositions (d26Mg) of most magnesite ores in the Huaziyu deposit are heavier (–0.75 ± 0.26‰) than most Proterozoic sedimentary dolostones. The Mg isotope compositions and major and trace element data indicate that the magnesites are probably not of hydrothermal origin. Instead, a Mg-rich carbonate precursor precipitated from evaporating seawater in a semi-closed system. Diagenetic brines altered the Mg-rich carbonate precursor to magnesite. Subsequently, recrystallization during regional metamorphism produced coarsely crystalline and saddle magnesite. These interpretations are consistent with the geological features and other geochemical data (element concentrations and C and O isotopes) for the magnesite ores. Hence, we interpret the formation of the Huaziyu magnesite deposit to be dominated by evaporative sedimentation and brine diagenesis.