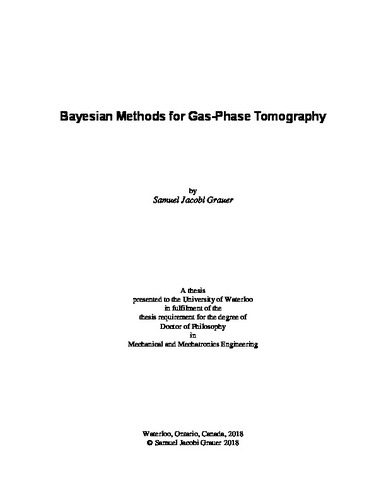 Gas-phase tomography refers to a set of techniques that determine the 2D or 3D distribution of a target species in a jet, plume, or flame using measurements of light, made around the boundary of a flow area. Reconstructed quantities may include the concentration of one or more species, temperature, pressure, and optical density, among others. Tomography is increasingly used to study fundamental aspects of turbulent combustion and monitor emissions for regulatory compliance. This thesis develops statistical methods to improve gas-phase tomography and reports two novel experimental applications. Tomography is an inverse problem, meaning that a forward model (calculating measurements of light for a known distribution of gas) is inverted to estimate the model parameters (transforming experimental data into a gas distribution). The measurement modality varies with the problem geometry and objective of the experiment. For instance, transmittance data from an array of laser beams that transect a jet may be inverted to recover 2D fields of concentration and temperature; and multiple high-resolution images of a flame, captured from different angles, are used to reconstruct wrinkling of the 3D reacting zone. Forward models for gas-phase tomography modalities share a common mathematical form, that of a Fredholm integral equation of the first-kind (IFK). The inversion of coupled IFKs is necessarily ill-posed, however, meaning that solutions are either unstable or non-unique. Measurements are thus insufficient in themselves to generate a realistic image of the gas and additional information must be incorporated into the reconstruction procedure. Statistical inversion is an approach to inverse problems in which the measurements, experimental parameters, and quantities of interest are treated as random variables, characterized by a probability distribution. These distributions reflect uncertainty about the target due to fluctuations in the flow field, noise in the data, errors in the forward model, and the ill-posed nature of reconstruction. The Bayesian framework for tomography features a likelihood probability density function (pdf), which describes the chance of observing a measurement for a given distribution of gas, and prior pdf, which assigns a relative plausibility to candidate distributions based on assumptions about the flow physics. Bayes’ equation updates information about the target in response to measurement data, combining the likelihood and prior functions to form a posterior pdf. The posterior is usually summarized by the maximum a posteriori (MAP) estimate, which is the most likely distribution of gas for a set of data, subject to the effects of noise, model errors, and prior information. The framework can be used to estimate credibility intervals for a reconstruction and the form of Bayes’ equation suggests procedures for improving gas tomography. The accuracy of reconstructions depends on the information content of the data, which is a function of the experimental design, as well as the specificity and validity of the prior. This thesis employs theoretical arguments and experimental measurements of scalar fluctuations to justify joint-normal likelihood and prior pdfs for gas-phase tomography. Three methods are introduced to improve each stage of the inverse problem: to develop priors, design optimal experiments, and select a discretization scheme. First, a self-similarity analysis of turbulent jets—common targets in gas tomography—is used to construct an advanced prior, informed by an estimate of the jet’s spatial covariance. Next, a Bayesian objective function is proposed to optimize beam positions in limited-data arrays, which are necessary in scenarios where optical access to the flow area is restricted. Finally, a Bayesian expression for model selection is derived from the joint-normal pdfs and employed to select a mathematical basis to reconstruct a flow. Extensive numerical evidence is presented to validate these methods. The dissertation continues with two novel experiments, conducted in a Bayesian way. Broadband absorption tomography is a new technique intended for quantitative emissions detection from spectrally-convolved absorption signals. Theoretical foundations for the diagnostic are developed and the results of a proof-of-concept emissions detection experiment are reported. Lastly, background-oriented schlieren (BOS) tomography is applied to combustion for the first time. BOS tomography employs measurements of beam steering to reconstruct a fluid’s optical density field, which can be used to infer temperature and density. The application of BOS tomography to flame imaging sets the stage for instantaneous 3D combustion thermometry. Numerical and experimental results reported in this thesis support a Bayesian approach to gas-phase tomography. Bayesian tomography makes the role of prior information explicit, which can be leveraged to optimize reconstructions and design better imaging systems in support of research on fluid flow and combustion dynamics.