Temporal record of osmium concentrations and 187Os/188Os in organic-rich mudrocks: Implications for the osmium geochemical cycle and the use of osmium as a paleoceanographic tracer 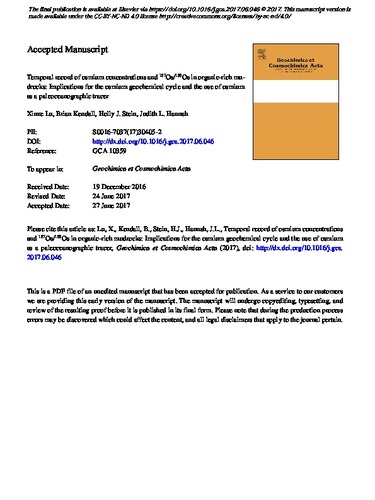 We present a compilation of 192Os concentrations (representing non-radiogenic Os) and initial 187Os/188Os isotope ratios from organic-rich mudrocks (ORM) to explore the evolution of the Os geochemical cycle during the past three billion years. The initial 187Os/188Os isotope ratio of a Re-Os isochron regression for ORM constrains the local paleo-seawater 187Os/188Os, which is governed by the relative magnitudes of radiogenic Os (old continental crust) and unradiogenic Os (mantle, extraterrestrial, and juvenile/mafic/ultramafic crust) fluxes to seawater. A first-order increase in seawater 187Os/188Os ratios occurs from the Archean to the Phanerozoic, and may reflect a combination of increasing atmosphere-ocean oxygenation and weathering of progressively more radiogenic continental crust due to in-growth of 187Os from radioactive decay of 187Re. Superimposed on this long-term trend are shorter-term fluctuations in seawater 187Os/188Os ratios as a result of climate change, emplacement of large igneous provinces, bolide impacts, tectonic events, changes in seafloor spreading rates, and lithological changes in crustal terranes proximal to sites of ORM deposition. Ediacaran-Phanerozoic ORM have mildly higher 192Os concentrations overall compared with pre-Ediacaran Proterozoic ORM based on the mean and 95% confidence interval of 10,000 median values derived using a bootstrap analysis for each time bin (insufficient Archean data exist for robust statistical comparisons). However, there are two groups with anomalously high 192Os concentrations that are distinguished by their initial 187Os/188Os isotope ratios. Ediacaran-Cambrian ORM from South China have radiogenic initial 187Os/188Os, suggesting their high 192Os concentrations reflect proximal Os-rich crustal source(s), ultraslow sedimentation rates, and/or other unusual depositional conditions. In contrast, the unradiogenic initial 187Os/188Os and high 192Os concentrations of some Mesozoic ORM can be tied to emplacement of large igneous provinces. Excluding these two anomalous groups and repeating the bootstrap analysis, we find that, overall, the 192Os concentrations for the Ediacaran-Phanerozoic and pre-Ediacaran Proterozoic time bins are not significantly different. An improved understanding of Os geochemical behavior in modern environments is required before our compilation can be fully used to constrain the temporal evolution of the seawater Os reservoir.