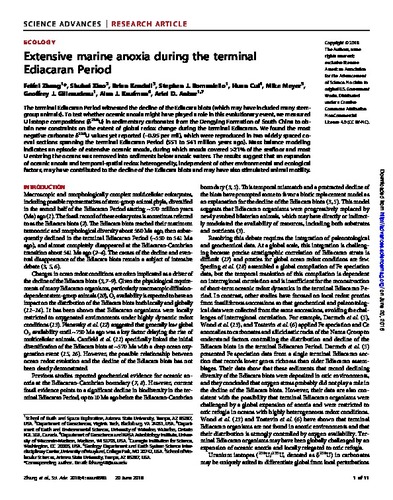 The terminal Ediacaran Period witnessed the decline of the Ediacara biota (which may have included many stemgroup animals). To test whether oceanic anoxia might have played a role in this evolutionary event, we measured U isotope compositions (d238U) in sedimentary carbonates from the Dengying Formation of South China to obtain new constraints on the extent of global redox change during the terminal Ediacaran. We found the most negative carbonate d238U values yet reported (−0.95 per mil), which were reproduced in two widely spaced coeval sections spanning the terminal Ediacaran Period (551 to 541 million years ago). Mass balance modeling indicates an episode of extensive oceanic anoxia, during which anoxia covered >21% of the seafloor and most U entering the oceans was removed into sediments below anoxic waters. The results suggest that an expansion of oceanic anoxia and temporal-spatial redox heterogeneity, independent of other environmental and ecological factors, may have contributed to the decline of the Ediacara biota and may have also stimulated animal motility.