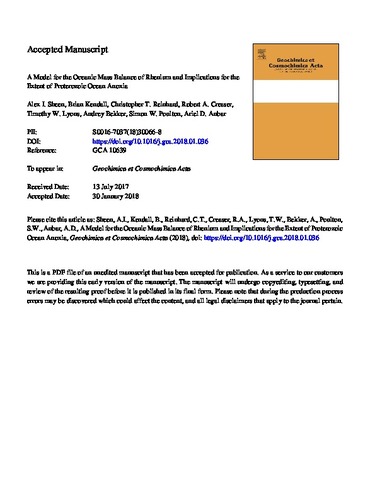 Emerging geochemical evidence suggests that the atmosphere-ocean system underwent a significant decrease in O2 content following the Great Oxidation Event (GOE), leading to a mid-Proterozoic ocean (ca. 2.0–0.8 Ga) with oxygenated surface waters and predominantly anoxic deep waters. The extent of mid-Proterozoic seafloor anoxia has been recently estimated using mass-balance models based on molybdenum (Mo), uranium (U), and chromium (Cr) enrichments in organic-rich mudrocks (ORM). Here, we use a temporal compilation of concentrations for the redox-sensitive trace metal rhenium (Re) in ORM to provide an independent constraint on the global extent of mid-Proterozoic ocean anoxia and as a tool for more generally exploring how the marine geochemical cycle of Re has changed through time. The compilation reveals that mid-Proterozoic ORM are dominated by low Re concentrations that overall are only mildly higher than those of Archean ORM and significantly lower than many ORM deposited during the ca. 2.22–2.06 Ga Lomagundi Event and during the Phanerozoic Eon. These temporal trends are consistent with a decrease in the oceanic Re inventory in response to an expansion of anoxia after an interval of increased oxygenation during the Lomagundi Event. Mass-balance modeling of the marine Re geochemical cycle indicates that the mid-Proterozoic ORM with low Re enrichments are consistent with extensive seafloor anoxia. Beyond this agreement, these new data bring added value because Re, like the other metals, responds generally to lowoxygen conditions but has its own distinct sensitivity to the varying environmental controls. Thus, we can broaden our capacity to infer nuanced spatiotemporal patterns in ancient redox landscapes. For example, despite the still small number of data, some mid-Proterozoic ORM units have higher Re enrichments that may reflect a larger oceanic Re inventory during transient episodes of ocean oxygenation. An improved understanding of the modern oceanic Re cycle and a higher temporal resolution for the Re compilation will enable further tests of these hypotheses regarding changes in the surficial Re geochemical cycle in response to variations in atmosphere-ocean oxygenation. Nevertheless, the existing Re compilation and model results are in agreement with previous Cr, Mo, and U evidence for pervasively anoxic and ferruginous conditions in mid-Proterozoic oceans.