Fabrication of Nanocomposite Filaments for 3D-Printing of Water Treatment Membranes 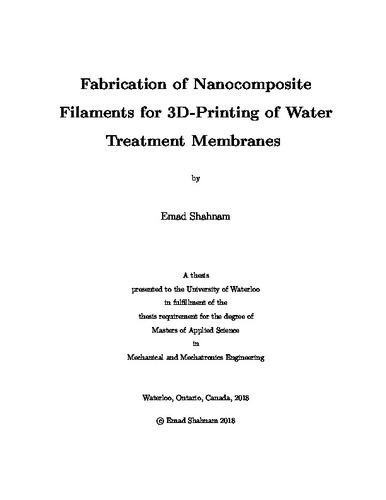 The ever-increasing demand to provide fresh, potable water combined with the continued discharge of industrial and agricultural water pollutant chemicals in the water, require developments in conventional water and wastewater treatment operations. Bearing in mind the shortage and scarcity of fresh water sources, it is crucial to devise novel techniques, and design advanced materials to satisfy the growing demand for water and wastewater treatment. A treatment method that can be enhanced is in the area of Advanced Oxidation Processes (AOPs). AOPs are promising techniques in degradation of organic contaminants through reduction-oxidation (redox) reactions. Through advanced oxidation, the organic materials are decomposed into their constituent molecules. Nevertheless, AOPs often use consumable hazardous chemicals that need to be added to the treatment constantly. Photocatalysis is an advanced oxidation process in which non-consumable sources (in this case photocatalysts) can be employed. Titanium dioxide is a chemically inert, non-consumable photocatalyst. TiO2 nanomaterials can be used in water treatment in various applications. Aside from their photocatalytic oxidation ability which can degrade organic contaminants such as bacteria, algae, and pharmaceuticals, they can also be used to induce hydrophilicity, increase water flux and hinder membrane fouling. Despite their advantages, further improvements are required to immobilize TiO2 nanomaterials onto substrates in order to retain them within the water treatment reactors and reuse them constantly. One approach is to introduce TiO2 nanomaterials to water treatment membranes. Membrane-based technologies have been used worldwide in various operations such as microfiltration, ultrafiltration, nanofiltration, and reverse osmosis, to serve in several applications including seawater desalination, water purification, and contaminant removal, etc. Polymers are the most prevalent materials used in water treatment membranes. Despite the wide use of polymeric membranes, novel manufacturing methods are required to decrease energy consumption, use raw materials more efficiently, and possess advanced capabilities to obtain more complex designs. Moreover, membrane fouling is an important obstacle in maintaining the efficiency of the water treatment modules. Another challenge in the membrane treatment is the accumulation of the rejected species on the surface or within the pores of the membrane, which is referred to as 'fouling'. Fouling can reduce flux and intensify the trans-membrane pressure, resulting in energy consumption increase and the addition of chemicals to hinder the accumulation of the rejected particulates. Nanomaterials can be blended with polymers to produce nanocomposite membranes. TiO2 and bentonite nanomaterials can be added to the polymers to enhance their performance. Due to the significant developments in additive manufacturing (AM), the layer-by-layer production of water treatment membranes seems feasible. Fused deposition modeling (FDM) is an AM process that requires thin polymer filaments to feed a 3D-printer, to manufacture three-dimensional objects. Such filaments can be obtained by extruding polymer-based mixtures. In this research, TiO2 nanobelts were synthesized and together with purchased TiO2 nanoparticles and bentonite nanoclay, were blended with four different polymers (PMMA, Nylon, PSU, PVDF) in twenty-four different compositions, all of which were extruded to produce nanocomposite filaments. Several experiments have been executed to characterize the mechanical and water treatment properties of the extruded filaments. The filaments showed the capability to degrade organic dyes due to the photocatalysis of TiO2 nanomaterials and exhibited absorption because of the addition of bentonite nanoclay. Overall, this research demonstrated that the extrusion of nanomaterial-enhanced polymer filaments is feasible, and the produced filaments show the ability and characteristics to be employed in water treatment reactors. Such filaments can ultimately be fed into a 3D-printer to manufacture advanced water treatment membranes.