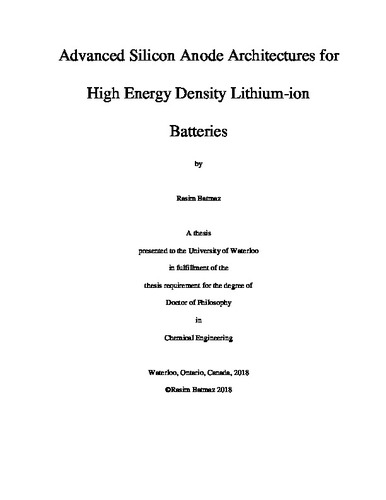 The pressing environmental issues and the continuous increase in energy demand have drawn tremendous attention to the development of advanced electrochemical energy storage systems (EESS). Lithium-ion batteries are currently the most developed EESS; however, they are insufficient to meet the requirements of energy intensive applications such as electric vehicles. This stems from the intrinsic limitations of commercial cathode and anode materials. Therefore, their electrochemical properties should be either improved by applying new fabrication techniques or replaced with new generation materials to increase their energy density, power density and stability. Silicon is a promising candidate as a new generation anode material due to its enormous theoretical lithium storage capacity. However, silicon faces some technological hurdles such as poor cycle stability and rate capability. This stems from its intrinsic low electrical conductivity, severe volume change upon reaction with lithium, leading to loss of electrode integrity and formation of an unstable solid electrolyte interphase. In an attempt to address these problems, the proposed research projects have been embodied in this thesis. The main focus of these projects includes: enhancing electronic conductivity, forming stable electrolyte interphase and preventing electrode structural failure. To achieve these goals, novel silicon-carbon composite materials in which the silicon particles were hosted by nano-architectured carbon scaffolds were prepared to improve the electronic conductivity and help form a stable electrolyte interphase. Furthermore, to prevent electrode structure failure, the electrodes prepared from these silicon-carbon composite materials were subjected to thermal treatment to alter the electrode architecture by tuning the chemical structure of the binder. In Chapter 4, an advanced silicon electrode was developed by using commercially available silicon nanoparticles (SiNPs) as the anode material and sulfur-doped graphene (SG) as a carbon support. The electrode slurry was prepared by mixing these components with polyacrylonitrile (PAN) binder and then applied to the current collector. After the electrodes were dried, a thermal treatment was applied to reconstruct the architecture of the electrodes. In this new electrode architecture, PAN polymer is turned into an aromatic structure (cPAN) with 6-membered rings hosting the nitrogen atoms in pyridinic position. Thus, after the treatment, SiNPs are surrounded by the 3D conductive hierarchical architecture of SG sheets and the aromatic structure of cPAN. It was found that the silicon atoms on the nanoparticle surfaces anchor to and covalently interact with the sulfur and nitrogen atoms of this carbonaceous nanoarchitecture. This prevents the agglomeration of silicon particles, maintains the electrode integrity and stabilizes the solid electrolyte interphase leading to a superior reversible capacity of over 1000 mAh g-1 for 2275 cycles at 2.0 A g-1. The excellent performance combined with the simple, scalable and non-hazardous approach render the process as a very promising candidate for lithium-ion battery technology. This lays the basis for the project in Chapter 5. Although a high-performance anode was obtained by utilizing commercially available silicon nanoparticles, the high-cost of nanoparticles hinders the commercialization. To address this challenge, we have fabricated a stable silicon-based anode using low-cost silicon micron particles (SiMPs) by developing a two-step top-down approach. Wet-milling of SiMPs within an electrode precursor slurry (sulfur-doped graphene (SG), polyacrylonitrile (PAN) in dimethylformamide) allows for nanostructuring of the silicon by a straightforward and scalable process. After casting the electrode precursor slurry on the current collector, the electrodes are annealed to achieve an ideally tuned SG-SiMPs-cPAN electrode structure. In this structure, the polymer binder (PAN) is converted into a 3D aromatic network of cPAN that wraps the silicon particles and forms micron-sized channels throughout the electrode structure. These micro-channels act as a mechanical buffer for the anisotropic volume changes of silicon particles during battery charging/discharging, thereby preventing electrode pulverization. This electrode structure delivers excellent capacity (3081 mAh g-1 at 0.1 A g-1) in addition to good rate capabilities and cycle life (1423 mAh g-1 at 2.0 A g-1 for 500 cycles). Furthermore, the efficiency of this technique makes it possible to expand its application to other anode materials that require mechanical robustness and electrical conductivity with the goal of preparing next generation lithium-ion batteries. With a practical goal of fabricating low cost, scalable and facile silicon electrodes, we have removed sulfur-doped graphene from the electrode recipe of Chapter 5 and eliminated ball-milling. In this study, metallurgical-sized silicon is used as the anode material. The electrodes deliver an areal capacity of 3.0 mAh cm-2 at 0.1 A g-1 and more than 1.5 mAh cm-2 at 2.0 A g-1 for high loading electrodes. For moderate loadings, 1030 mAh g-1 (0.5 mAh cm-2) is achieved after 250 cycles at 2.0 A g-1. This excellent performance is attributed to the post-annealing of electrodes in which the in-situ binder graphenization of PAN takes place, leading a 3D robust electrode architecture. The mSiPs are hosted within this architecture which serves as an electron pathway with its π-conjugated aromatic structure and provides channels on the electrode surface to guarantee electrolyte penetration for good ionic conductivity. The partial graphenization of PAN can help to maintain its elastic properties required to accommodate large volume expansion of mSiPs and maintain the electrode integrity. This may lead to the formation of stable SEI that enables good cycling and rate performance. Furthermore, our approach is compatible with industrial slurry fabrication technique and open to be adopted to other electrode materials.