To Look, or Not to Look? Attention to Threat and Avoidance of Threat While Checking 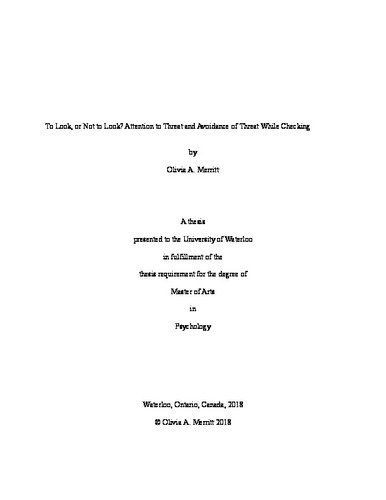 It has been argued that people with obsessive-compulsive disorder (OCD) exhibit facilitated attention to threat (early attentional capture) and difficulty disengaging from it (persistent attentional capture), which in turn produces prolonged compulsive behaviour (e.g., Rachman, 2002). In turn, prolonged or repeated behavior reduces, rather than increases, confidence that things have been properly checked (e.g. van den Hout & Kindt, 2003). A recent study of visual attention to threat while checking a stove found that more attention to stove was associated with reduced certainty that the stove was off in the anxious controls, but not in the group with OCD (Bucarelli and Purdon, 2016). They also observed that people with OCD looked at threat stimuli (flammable items around the stove) less than did anxious controls, leading the authors to hypothesize that those with OCD may strategically avoid looking at threat in order to avoid checking long enough for it to degrade certainty. The current study was designed to further explore the relationship between visual attention to threat, checking behavior, and strategic avoidance. In this study, 29 participants high in checking behavior (HCB) and 30 participants low in checking behaviour (LCB) completed a stove-checking task while wearing an eye tracker, after which they rated their motivation to attend to, and avoid, threat items around the stove. The HCB group checked longer and were less certain after the task. They reported more subjective avoidance of threat items than the LCB group but actual visual attention to threat was not different between groups. Visual attention to threat did predict less certainty that harm was avoided in the HCB but not the LCB group. It is possible that people who have sub-clinical checking concerns do not yet have experience with prolonged checking and have not yet evolved actual strategic avoidance, despite a desire to avoid threat.