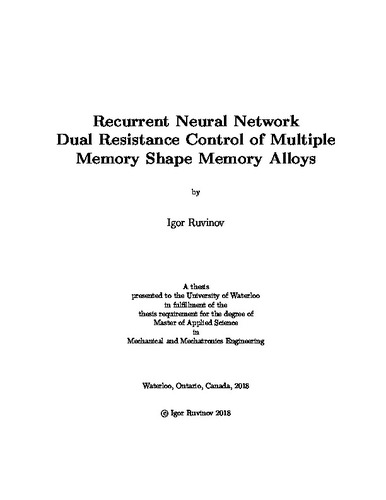 Shape memory alloys (SMAs) are materials with extraordinary thermomechanical properties which have caused numerous engineering advances. NiTi SMAs in particular have been studied for decades revealing many useful characteristics relative to other SMA compositions. Their application has correspondingly been widespread, seeing use in the robotics, automotive, and aerospace industries, among others. Nevertheless, several limitations inherent to SMAs exist which inhibit their applicability, including their inherent single transformation temperature and their complex hysteretic actuation behaviour. To overcome the former challenge, one method utilizes high energy laser processing to perform localized vaporization of nickel and accurately adjust its transformation temperatures. This method can reliably produce NiTi SMAs with multiple monolithic transformation memories. There have also been attempts to overcome the latter of the aforementioned challenges by designing systems which model NiTi's hysteretic behaviour. When applied to actuators with a single transformation memory, these methods require the use of external sensors for modeling actuators with varying current and load, driving up the cost, weight, and complexity of the actuator. Embedding a second transformation memory with different phase into NiTi actuators can overcome this issue. By measuring electrical resistance across the two phases, sufficient information can be extracted for differentiating events caused by heating from those caused by applied load. The current study examines NiTi wires with two embedded transformation memories and utilizes recurrent neural networks for interpreting the sensed data. The knowledge gained through this study was used to create a recurrent neural network-based model which can accurately estimate the position and force applied to the NiTi actuator without the use of external sensors. The first part of the research focused on obtaining a comprehensive thermomechanical characterization of laser processed and thermomechanically post-processed NiTi wires with two embedded transformation memories, with one memory exhibiting full SME and the second partial PE at room temperature. A second objective of this section was to acquire cycling data from the processed wires which would be used for training the artificial neural networks in the following section of the study. The selected laser processing and post-processing parameters resulted in a transformation temperature increase of 61.5°C and 35.3°C for Af and Ms, respectively, relative to base metal. Furthermore, the post-processing was found to successfully restore the majority of the lost mechanical properties, with the ultimate tensile strength recovered to 84% of its corresponding base metal value. This research resulted in the fabrication of NiTi wires with two distinct embedded transformation memories, exhibiting sufficient mechanical and cyclic properties for the next phase of the research. Once an acceptable amount of NiTi actuation cycling data was acquired, the second part of the research consisted of training multiple recurrent neural network architectures with varying hyperparameters on the data and selecting the model which achieved the best performance. The hyperparameter optimization was performed on data with constant applied load, resulting in a model which successfully estimated the actuator's position with 99.2% accuracy. The optimized hyperparameters were then used to create a recurrent neural network model which was trained to estimate both position and force using the full acquired data set, capitalizing on the two embedded memories. The model achieved overall position and force estimation accuracy of 98.5% and 96.0%, respectively, on data used to train it, and 96.6% and 89.8%, respectively, on data it had never before encountered. The result of this study was the successful development of an accurate RNN-based position and force estimation model for NiTi actuators with two embedded phases. Using this model, a position controller was implemented which resulted in 95.9% position accuracy under varying applied loads.