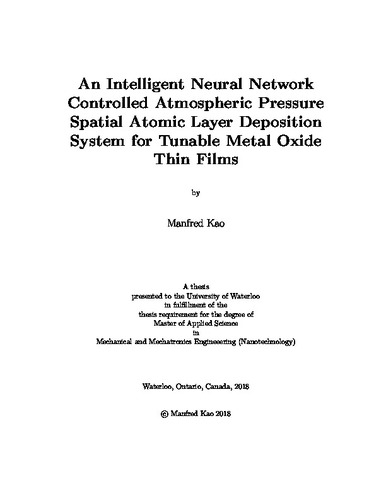 Atmospheric pressure spatial atomic layer deposition (AP-SALD) is a novel thin film fabrication technique to create conformal and pin-hole free films. The growth rate of AP-SALD is hundreds of times greater than conventional vacuum based methods which makes AP-SALD particularly attractive for large-scale roll-to-roll manufacturing. In this work, an AP-SALD system was built from scratch, in situ characterization tools were developed to monitor film properties during the growth of the film, an artificial neural network (ANN) was trained to model the AP-SALD system and an inverse neural network algorithm was implemented to generate recipes to produce films with defined properties. A commercial controller was used to interface with all the sensors and actuators in the AP-SALD system. A time-optimal 5th order trajectory with a drift algorithm was implemented to oscillate the substrate stage back and forth, and a feedback control with feedforward and an anti-windup algorithm was used to maintain the temperature of the substrate during deposition. The position error of the stage was visually imperceptible after 1000 oscillations and the temperature settling time of the stage was around 10 minutes which was significantly less than the time required to set up the AP-SALD system. The AP-SALD system was able to repeatably deposit zinc oxide (ZnO) films with diethylzinc and water as precursors. In situ electrical and optical tools were developed to measure the resistivity, film thickness and bandgap during the deposition. A printed circuit board (PCB) was designed to act as the electrodes and the substrate. A source/measure unit along with custom electronics measured the resistance of the films. The ZnO film grew on the PCB in island formations before coalescing into a continuous film. The bulk resistivity of ZnO was found to be approximately 15 Ω·cm. Reflectance spectroscopy was used to measure the bandgap and thickness of the film during the deposition by fitting the spectrum to the Tauc-Lorentz model. A bandgap of 3.18 eV was found for ZnO films. The lowest growth rate achieved was 0.27 nm per ALD cycle indicating there is some mixing of the precursors. A shallow feedforward ANN was trained to model the AP-SALD. The mean squared error (MSE) of the training set and test set was 0.9792 and 1.3287, respectively, indicating a good fit that can generalize well to new data. An inverse neural network algorithm was implemented to find the deposition parameters given the desired film properties. Since there may be infinite solutions, the algorithm returns the first optimal solution. The MSE of the estimated parameters were 2.5851E-14 indicating the algorithm was able to accurately inverse the AP-SALD model.