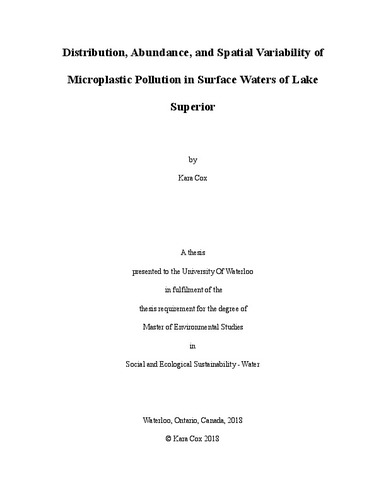 Plastic pollution in oceans and lakes has been a concern for more than three decades, and largely through the breakdown of large plastics, microplastic pollution has been of real concern for over 20 years. Most research has focused on marine settings but freshwater systems are equally vulnerable to microplastic pollution. The Laurentian Great Lakes system has been the subject of little microplastic research and Lake Superior has received even less focus than the other four lakes. The objective of this study is to fill that knowledge gap and determine the abundance and spatial distribution, spatial variability, and polymer identities of microplastic pollution in the surface waters of Lake Superior. In 2014, 94 double net samples were collected from the surface waters of Lake Superior and preserved. These samples comprise the most comprehensive surface water survey of any of the Great Lakes to date, and the first to employ double neuston net trawls. Since there is not yet a standardized sampling method, a comparison of side-by-side samples will indicate whether single net surveys are sufficient and could be used as the standard sampling method. A total of 187 samples was processed using wet peroxide oxidation and analyzed using a dissecting microscope. A sampling of all plastic particles collected were also analyzed using FTIR spectrometry to determine polymer identity. Abundances calculated throughout Lake Superior show wide variability, ranging between 4,000 to more than 100,000 particles/km2 but the majority of locations have an abundance between 20,000 to 50,000 particles/km2. Average abundance in Lake Superior is 30,271 particles/km2 (95% confidence interval of the mean ranges from 20,917 to 39,797 particles/km2) which suggests a total count of more than 2.4 billion (1.7 to 3.3 billion) particles across the lake’s surface. Both the calculated average and lake wide total for Superior are higher than Lake Michigan, which as an average abundance of 17, 276 particles/km2 and holds roughly 1 billion particles. Lake Erie is more polluted than both Lake Superior and Lake Michigan, with an average abundance of 105,502 particles/km2 and a total of roughly 2.7 billion particles. Lake Superior was expected to have lower abundances than Lake Michigan because of lower population density and industrialization, but the higher numbers can likely be attributed to the greater size and longer residence time of Lake Superior.  Distributions of plastic particles, characterized by size fraction and type, differed between nearshore and offshore samples and between samples collected in Eastern versus Western portion of the lake. No difference was detected between the paired net samples, indicating that single net sampling produces a representative estimate of microplastic particle abundance and distribution within a body of water. Most of the particles found were fibres (67%), and most were contained in the smallest classified size fraction (0.3-1 mm) indicative of the low population density and industrialization along the shores of Lake Superior. The most common type of polymer found was polyethylene (51%), followed by polypropylene (19%) which was expected given global plastics production is dominated by polyethylene, followed by polypropylene. This is also similar to results obtained from other studies. Types of plastic present, when separated by morphology and size, can help identify pollution sources which is a necessary step in plastic pollution management.