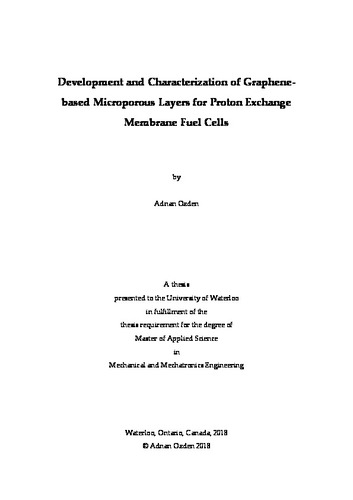 Proton exchange membrane (PEM) fuel cell is an energy-conversion device that converts the chemical energy of hydrogen and oxygen into electricity directly through electrochemical reactions with only water and heat as reaction by-products. Over the last decade, PEM fuel cell technology has been considerably advanced, with remaining technical and scientific challenges to be overcome for further improvements in performance, durability, stability, and cost. For example, specifically for end-use applications, fuel cell system is equipped with an external humidifier to ensure an adequate level of humidification for the membrane-electrode assembly (MEA). However, such a humidification methodology not only increases the weight, complexity, and manufacturing cost of the fuel cell system, but also substantially reduces its overall energy-conversion efficiency through increased parasitic power consumption. Thus, if an adequate level of humidification could be met without using an external humidifier, then the eventual system cost, weight, and complexity could be reduced substantially, and such an improvement would certainly pave the way towards the widespread commercialization of this technology. Such a target could be achieved through a well-designed MEA architecture, which can maintain sufficient humidification, regardless of operating conditions. In this context, as a key component in the management of water (and to a lesser degree, heat) for improved performance, stability, and durability of PEM fuel cells under a wide range of operating conditions, microporous layer (MPL) should be designed to ensure self-humidification for the MEA. In recent years, the criticality of MPLs to water management has been progressively recognized, which further confirmed through promising cell performance characteristics obtained from the laboratory-scale investigations. However, further improvement requires further breakthroughs, particularly in the development and implementation of alternative MPL materials. The performance of MPLs depends to a large extent on their morphological, microstructural, physical, and electrochemical characteristics, which are, in turn, governed by the specifications of their materials, typically a carbon or carbon-derived powder and a polymeric binder. Owing to their favorable features, i.e., high electrical and thermal conductivity, high corrosion resistance, and wide availability and hence affordability, various types of carbon-based materials, such as Vulcan® XC-72R, Ketjenblack® EC-300J, Ketjenblack® EC-600JD, Black Pearls® 2000, and Hicon Black®, have been employed as primary MPL materials, albeit with their widely known drawbacks in terms of morphological degradation during continuous cell operation. In addition, MPLs made of these conventional carbon powders can only provide promising performance under a very limited range of operating conditions, which is not fully satisfactory for practical applications. As an alternative to conventional carbon/carbon-derived materials, graphene, a monolayer of carbon atoms arranged in a two-dimensional (2D) lattice, would be an appealing material, due to its unique characteristics, including extremely high single-particle electrical conductivity, high thermal conductivity, high surface area, and high mechanical stiffness and elasticity, and many others. Graphene flakes are also prone to stack horizontally and built up a well-connected and smooth layer. Thus, placement of such a compact and smooth layer between the catalyst layer (CL) and the gas diffusion layer (GDL) could reasonably boost the catalyst utilization (by preventing migration of precious catalyst nanoparticles into the GDL), improve interfacial characteristics, and facilitate heat transport in the in- and through-plane directions. In this thesis, graphene is therefore considered to be an alternative MPL material. Accordingly, graphene-based MPLs are prepared and characterized through morphological, microstructural, physical, and electrochemical characterizations to reveal many of their unexplored characteristics. Cell performances of the graphene-based MPLs are also investigated for the first time in a scaled-up PEM fuel cell. Comparison studies are conducted with an MPL made of an extensively used commercial carbon-based material, Ketjenblack. The results indicate that the graphene-based MPL has a unique morphology composed of firmly and horizontally packaged graphene flakes that substantially improves water management, electron transport, catalyst activity and catalyst utilization. Due to such a desirable morphology, the graphene-based MPL demonstrates comparable performance to the one made of Ketjenblack under high-humidity operation, while exhibits excellent performance superiorities (up to a peak power density of about 53% better than the conventional carbon-based MPL (Ketjenblack)), specifically under low- and intermediate-humidity operation. Overall, the graphene-based MPL is found to have a significant potential to meet the performance demand under low-, intermediate-, and high-humidity conditions, thereby potentially eliminating the dependence of PEM fuel cells on external humidifiers.