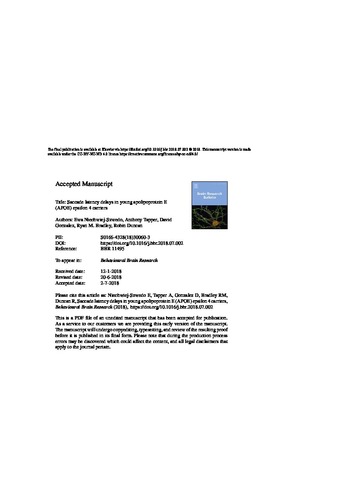 The apolipoprotein E (APOE) epsilon 4 isoform has been associated with a significantly greater risk of developing late onset Alzheimer’s disease (AD). However, the negative effects of APOE-ε4 allele on cognitive function vary across the lifespan: reduced memory and executive function have been found in older individuals but, paradoxically, young APOE-ε4 carriers perform better on cognitive tests and show higher neural efficiency. This study aimed to assess the association between APOE genotype and saccade latency using a prosaccade and antisaccade task in young individuals (N = 97, age: 17–35 years). Results showed that prosaccade latency was significantly delayed in a group of ε4 carriers in comparison to non-carriers, which was due to a lower rate of signal accumulation rather than a change in the criterion threshold. In contrast, there was no significant genotype difference for antisaccade latency in this young cohort. These results indicate that prosaccade latency may be useful in establishing the APOE behavioural phenotype, which could ultimately assist with distinguishing between normal and pathological aging.