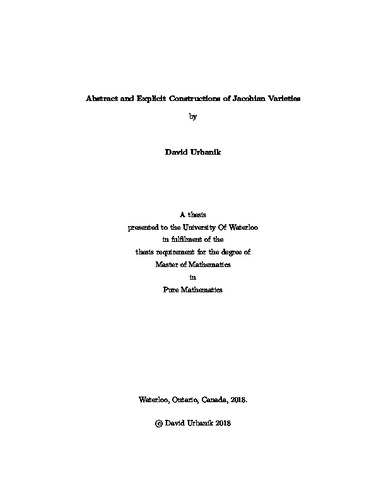 Abelian varieties, in particular Jacobian varieties, have long attracted interest in mathematics. Their influence pervades arithmetic geometry and number theory, and understanding their construction was a primary motivator for Weil in his work on developing new foundations for algebraic geometry in the 1930s and 1940s. Today, these exotic mathematical objects find applications in cryptography and computer science, where they can be used to secure confidential communications and factor integers in subexponential time. Although in many respects well-studied, working in concrete, explicit ways with abelian varieties continues to be difficult. The issue is that, aside from the case of elliptic curves, it is often difficult to find ways of modelling and understanding these objects in ways amenable to computation. Often, the approach taken is to work ``indirectly'' with abelian varieties, in particular with Jacobians, by working instead with divisors on their associated curves to simplify computations. However, properly understanding the mathematics underlying the direct approach --- why, for instance, one can view the degree zero divisor classes on a curve as being points of a variety --- requires sophisticated mathematics beyond what is usually understood by algorithms designers and even experts in computational number theory. A direct approach, where explicit polynomial and rational functions are given that define both the abelian variety and its group law, cannot be found in the literature for dimensions greater than two. In this thesis, we make two principal contributions. In the first, we survey the mathematics necessary to understand the construction of the Jacobian of a smooth algebraic curve as a group variety. In the second, we present original work with gives the first instance of explicit rational functions defining the group law of an abelian variety of dimension greater than two. In particular, we derive explicit formulas for the group addition on the Jacobians of hyperelliptic curves of every genus g, and so give examples of explicit rational formulas for the group law in every positive dimension.