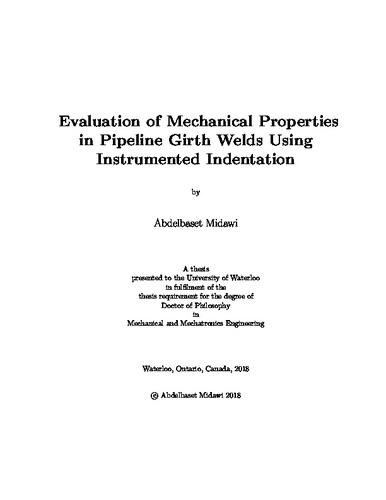 This study aims to develop a new method to characterize mechanical properties using instrumented indentation. The indentation results were correlated with observed microstructure in weld metal of gas metal arc welding (GMAW) pipeline joints with their mechanical properties such as: hardness and yield strength. The focus of this work was on a representative API-X80 grade weldment using different commercial welding consumables. Microstructure analysis was conducted on the as-deposited and reheated regions of the weld in each pass. The microhardness distribution was mapped for the whole weld cross section and correlated with the observed microstructure. A nearly at tip indenter was used to measure the load versus displacement response during micro-scale instrumented indentation test, in order to determine the yield strength for different areas in the weld region. This technique had previously been used as provided by the inventor to determine the apparent yield strength for a wide range of engineering materials. However, the detailed physics of the method were not described. In the second phase of this work, a finite element model was built to understand the mechanics of contact using this indenter geometry and to derive the full stress-strain relationship from the indentation test data (based on load-displacement response) using an inverse approach, and to correlate these to the experimentally measured yield strength for pipeline steels. To establish the inverse approach, the model was tested in the first stage for common materials such as steel and aluminium alloys. This inverse approach technique aims to determine the tensile properties by analyzing the full load-displacement curves. In addition, by further analysis of the FE modelling results, a new technique to determine yield strength based on the load-displacement curve and indenter geometry was developed and validated with the experimental results. This technique, utilizing the nearly-flat indenter geometry along with cavity expansion theory and/or slipline theory, allows one to determine yield strength directly from an experimental load-displacement curve. The advantage of using this technique is that there is no need to use regression fitting or other assumptions of the material properties to estimate yield strength, or require FE modelling. Different steel and aluminium alloys were tested and the results correlated well with the yield strength measured by conventional tensile testing. Validating this indentation method as a localized strength measurement technique is essential, so that it can be used to conveniently test different regions of a weld joint. Once the method was validated, the yield strength was measured for different API-X80 pipeline steel welds using the nearly at tip indenter. The indentation based measurements of the apparent yield strength were correlated with the microstructure and hardness values in each zone. Moreover, the indentation technique was able to characterize narrow zones in the weld and heat effected zone (HAZ) such as reheated weld metal, deposited weld metal, coarse grain heat effected zone (CGHAZ), and fine grain heat effected zone (FGHAZ). Digital Image Correlation (DIC) was also used to map the strain distribution during transverse tensile testing for the welds. DIC data provided further evidence of the strain distribution post-yielding, along with more information regarding the effect of strength mismatch level on strain distribution through the welding joint. The result of the strain map also was correlated with the formed microstructure in the WM and HAZ. The DIC data were used to construct local stress-strain curves based on the iso-stress condition assumption. The tensile yield strength results were compared with the indentation yield strength in different zones through and across the weld zone and the results showed good agreement between them and suggest that the nearly at tip indentation technique could be used as a tool to determine the level of strength mismatch between a weld metal and base metal. In addition, the convenience of the indentation technique allows one to determine strength mismatch in both the longitudinal and transverse directions revealing that the estimation of the strength mismatch using the all-weld metal could overestimate the strength mismatch level up to 10%, which may lead to non-conservative design. Finally, further study of the mechanical properties of the weld metal in the longitudinal and transverse directions indicated that the weld metal has anisotropic properties. The indentation results were compared with conventional tensile test results for all-weld metal and cross-weld specimens; results from the latter specimens also supports anisotropy of strength in the weld. These results were also supported by hardness mapping and detailed microstructral cheracterztion of the weld metal. This understanding is essential to improve the integrity and reliability of welds and testing procedures for pipeline applications.