The neural systems for perceptual updating 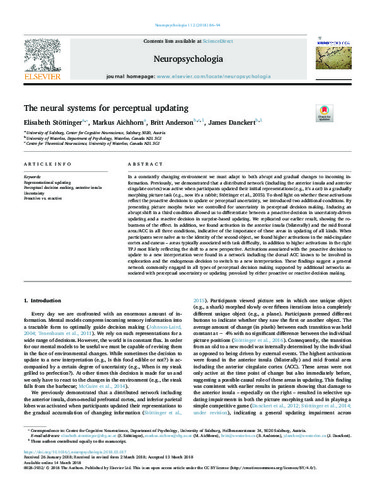 In a constantly changing environment we must adapt to both abrupt and gradual changes to incoming information. Previously, we demonstrated that a distributed network (including the anterior insula and anterior cingulate cortex) was active when participants updated their initial representations (e.g., it's a cat) in a gradually morphing picture task (e.g., now it's a rabbit; Stöttinger et al., 2015). To shed light on whether these activations reflect the proactive decisions to update or perceptual uncertainty, we introduced two additional conditions. By presenting picture morphs twice we controlled for uncertainty in perceptual decision making. Inducing an abrupt shift in a third condition allowed us to differentiate between a proactive decision in uncertainty-driven updating and a reactive decision in surprise-based updating. We replicated our earlier result, showing the robustness of the effect. In addition, we found activation in the anterior insula (bilaterally) and the mid frontal area/ACC in all three conditions, indicative of the importance of these areas in updating of all kinds. When participants were naïve as to the identity of the second object, we found higher activations in the mid-cingulate cortex and cuneus – areas typically associated with task difficulty, in addition to higher activations in the right TPJ most likely reflecting the shift to a new perspective. Activations associated with the proactive decision to update to a new interpretation were found in a network including the dorsal ACC known to be involved in exploration and the endogenous decision to switch to a new interpretation. These findings suggest a general network commonly engaged in all types of perceptual decision making supported by additional networks associated with perceptual uncertainty or updating provoked by either proactive or reactive decision making.