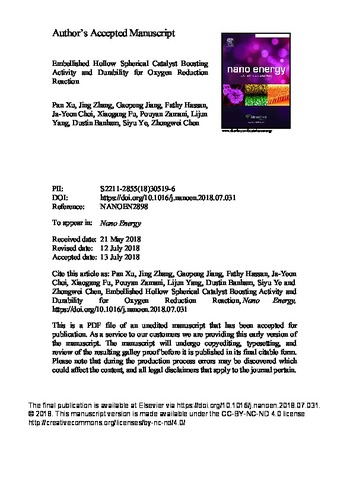 Transition metals hybridized to heteroatom doped carbon material can be regarded as the most promising non-noble candidate for boosting the sluggish kinetics of oxygen reduction reaction (ORR). However, it has always been a challenge to vastly boost the activity, and simultaneously retain a favorable structure from the supporting material. Herein, we prepared a high surface area hollow spherical carbon as a supporting material, and employed aminothiophenol (ATI) and poly-aminothiophenol (PATI) as heteroatom precursors to synthesize nitrogen and sulfur co-doped catalysts, i.e. HCS-A and HCS-PA, respectively. The two catalysts possessed chemically similar surface composition, and nearly identical chemical states for each element. However, only HCS-A was able to vastly inherit both morphological advantage and high surface area from the carbon support. In further half-cell electrochemical testing, HCS-A performed better ORR activities and higher selectivity toward 4 electron pathway than HCS-PA in both acidic and alkaline media. Moreover, HCS-A was proven to have excellent durability in half-cell testing, methanol tolerance as well as outstanding peak power density in both fuel cells and zinc-air batteries. This work not only indicates the promising performances of HCS-A, but more importantly offers a new viewpoint on the selection of heteroatom precursor to retain a favorable structure.