Increased Early Sensitivity to Eyes in Mouthless Faces: In Support of the LIFTED Model of Early Face Processing 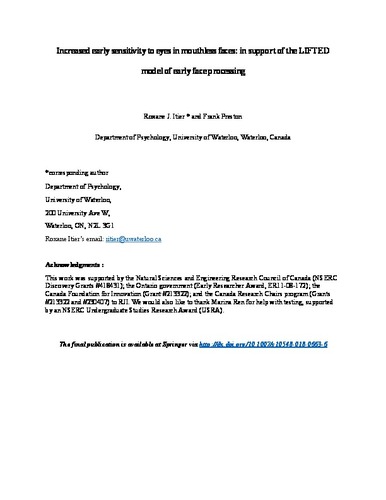 The N170 ERP component is a central neural marker of early face perception usually thought to reflect holistic processing. However, it is also highly sensitive to eyes presented in isolation and to fixation on the eyes within a full face. The lateral inhibition face template and eye detector (LIFTED) model (Nemrodov et al. in NeuroImage 97:81–94, 2014) integrates these views by proposing a neural inhibition mechanism that perceptually glues features into a whole, in parallel to the activity of an eye detector that accounts for the eye sensitivity. The LIFTED model was derived from a large number of results obtained with intact and eyeless faces presented upright and inverted. The present study provided a control condition to the original design by replacing eyeless with mouthless faces, hereby enabling testing of specific predictions derived from the model. Using the same gaze-contingent approach, we replicated the N170 eye sensitivity regardless of face orientation. Furthermore, when eyes were fixated in upright faces, the N170 was larger for mouthless compared to intact faces, while inverted mouthless faces elicited smaller amplitude than intact inverted faces when fixation was on the mouth and nose. The results are largely in line with the LIFTED model, in particular with the idea of an inhibition mechanism involved in holistic processing of upright faces and the lack of such inhibition in processing inverted faces. Some modifications to the original model are also proposed based on these results.