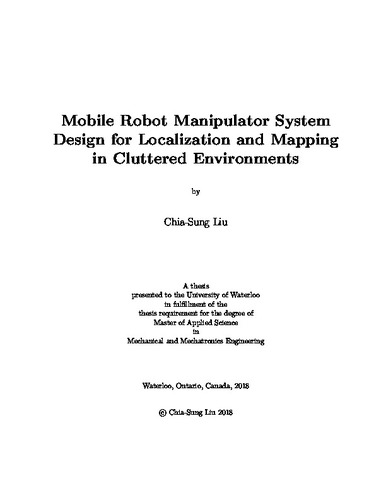 In this thesis, a compact mobile robot has been developed to build real-time 3D maps of hazards and cluttered environments inside damaged buildings for rescue tasks using visual Simultaneous Localization And Mapping (SLAM) algorithms. In order to maximize the survey area in such environments, this mobile robot is designed with four omni-wheels and equipped with a 6 Degree of Freedom (DOF) robotic arm carrying a stereo camera mounted on its end-effector. The aim of using this mobile articulated robotic system is monitor different types of regions within the area of interest, ranging from wide open spaces to smaller and irregular regions behind narrow gaps. In the first part of the thesis, the robot system design is presented in detail, including the kinematic systems of the omni-wheeled mobile platform and the 6-DOF robotic arm, estimation of the biases in parameters of these kinematic systems, the sensors and calibration of their parameters. These parameters are important for the sensor fusion utilized in the next part of the thesis, where two operation modes are proposed to retain the camera pose when the visual SLAM algorithms fail due to variety of the region types. In the second part, an integrated sensor data fusion, odometry and SLAM scheme is developed, where the camera poses are estimated using forward kinematic equations of the robotic arm and fused to the visual SLAM and odometry algorithms. A modified wavefront algorithm with reduced computational complexity is used to find the shortest path to reach the identified goal points. Finally, a dynamic control scheme is developed for path tracking and motion control of the mobile platform and the robot arm, with sub-systems in the form of PD controllers and extended Kalman filters. The overall system design is physically implemented on a prototype integrated mobile robot platform and successfully tested in real-time.