Continuous Modification of Polypropylene Via Photoinitiation 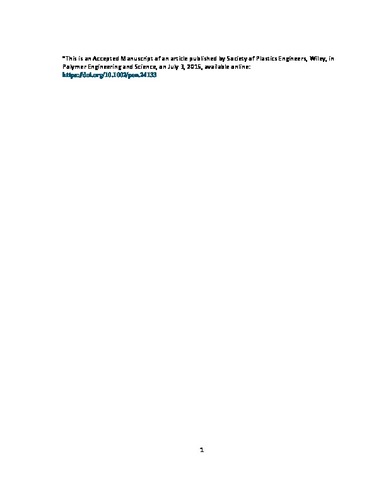 A twin screw extruder was used for continuous modification of polypropylene (PP) via UV radiation. Long chain branches were incorporated in the PP backbone to modify its rheological properties. Benzophenone (BPH) as photoinitiator and trimethylolpropane triacrylate (TMPTA) as coagent were utilized during PP photomodification. Radiation was carried out after mixing in the extruder on solid stretched strands with approximately 0.3 mm thickness. The effects of photoinitiator concentration, radiation time and coagent presence were studied via a replicated two-level full factorial design of experiments. It was shown that photomodification of PP can be done continuously. Formation of long chain branches (LCBs) in the experimental runs was confirmed via rheological measurements. Gel content of the samples was also measured. It was found that long chain branches can be formed in PP with and without TMPTA at certain processing conditions. The amount of gel in the samples prepared with TMPTA was higher; however, the gel content could be controlled by manipulating BPH concentration and radiation time.