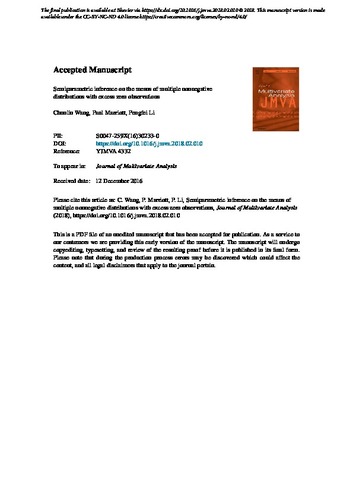 A non-standard, but not uncommon, situation is to observe multiple samples of nonnegative data which have a high proportion of zeros. This is the so-called excess of zeros situation and this paper looks at the problem of making inferences about the means of the underlying distributions. Under the semiparametric setup, proposed by Wang et al. (2017), we develop a unified inference framework, based on an empirical likelihood ratio (ELR) statistic, for making inferences on the means of multiple such distributions. A chi-square-type limiting distribution of this statistic is established under a general linear null hypothesis about the means. This result allows us to construct a new test for mean equality. Simulation results show favorable performance of the proposed ELR when compared with other existing methods for testing mean equality, especially when the correctly specified basis function in the density ratio model is the logarithm function. A real data set is analyzed to illustrate the advantages of the proposed method.