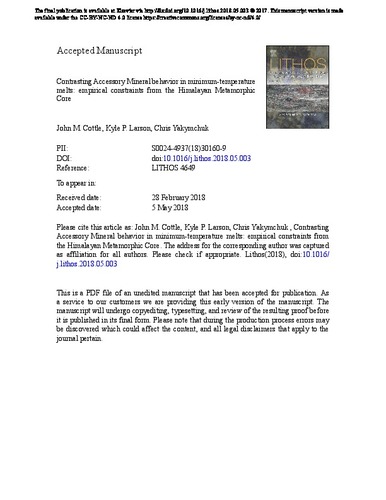 Medium-grained leucogranite in the Tama Kosi region of the Nepalese Himalayan Metamorphic Core yields a relatively narrow range of monazite 208Pb/232Th dates with a dominant population at ~21.0 Ma inferred to represent crystallization of an early plutonic phase. In contrast, the pegmatitic portion of the same intrusive complex, that cross-cuts the medium-grained leucogranite, contains zircon, monazite and xenotime that each display near-identical age spectra, recording semi-continuous (re-)crystallization from 27.5 Ma to 21.0 Ma, followed by a ~2 m.y. hiatus then further (re-)crystallization between 19.4 and 18.6 Ma. The “gap” in pegmatite dates corresponds well to the crystallization age of the older leucogranite, whereas the end of accessory phase growth in the pegmatite coincides with the onset of regional-scale cooling. Detailed textural, trace element and thermochronologic data indicate that the range of zircon, monazite and xenotime dates recorded in the pegmatite reflect inherited components that underwent semi-continuous (re-)crystallization during metamorphism and/or anatexis in the source region(s), whereas dates younger than the hiatus indicate accessory phase recrystallization, related to both fluid influx and a concomitant increase in temperature. In contrast, the lack of an inherited component(s) in the medium-grained leucogranite phase is inferred to be a result of complete dissolution during partial melting. A model is proposed in which influx of heat and H2O-rich fluids associated with early leucogranite emplacement temporarily delayed zircon and monazite and xenotime crystallization, respectively. These data highlight the importance of measuring spatially resolved dates, trace elements and textural patterns from multiple accessory minerals combined with model constraints to better understand the often-complex crystallization history of anatectic melts in collisional orogens.