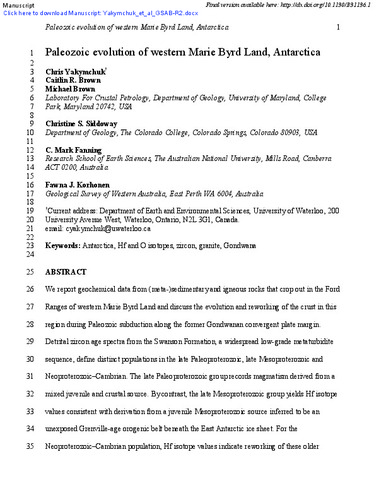 We report geochemical data from (meta-) sedimentary and igneous rocks that crop out in the Ford Ranges of western Marie Byrd Land and discuss the evolution and reworking of the crust in this region during Paleozoic subduction along the former Gondwanan convergent plate margin. Detrital zircon age spectra from the Swanson Formation, a widespread low-grade metaturbidite sequence, define distinct populations in the late Paleoproterozoic, late Mesoproterozoic, and Neoproterozoic-Cambrian. The late Paleoproterozoic group records magmatism derived from a mixed juvenile and crustal source. By contrast, the late Mesoproterozoic group yields Hf isotope values consistent with derivation from a juvenile Mesoproterozoic source inferred to be an unexposed Grenville-age orogenic belt beneath the East Antarctic ice sheet. For the NeoproterozoicCambrian population, Hf isotope values indicate reworking of these older materials during Ross-Delamerian orogenesis. New U-Pb ages from the Devonian- Carboniferous Ford Granodiorite suite across the Ford Ranges reveal an extended period of arc magmatism from 375 to 345 Ma. For four younger samples of Ford Granodiorite, Hf and O isotope values in zircon suggest involvement of a larger (meta-) sedimentary component in the petrogenesis than for two older samples. This contrasts with the secular trend toward more juvenile values documented from Silurian to Permian granite suites in the Tasmanides of eastern Australia and Famennian to Tournasian granite suites in New Zealand, pieces of continental crust that were once contiguous with western Marie Byrd Land along the Gondwana margin. The differences may relate to an along-arc change from the typical extensional accretionary mode in eastern Australia to a neutral or an advancing mode in West Antarctica, and to an across-arc difference in distance from the trench between the New Zealand fragments of Zealandia and western Marie Byrd Land. Upper Devonian anatectic granites in the Ford Ranges most likely record reworking of early Ford Granodiorite suite members during arc magmatism.