From Source to Sink: Petrogenesis of Cretaceous Anatectic Granites from the Fosdick Migmatite-Granite Complex, West Antarctica 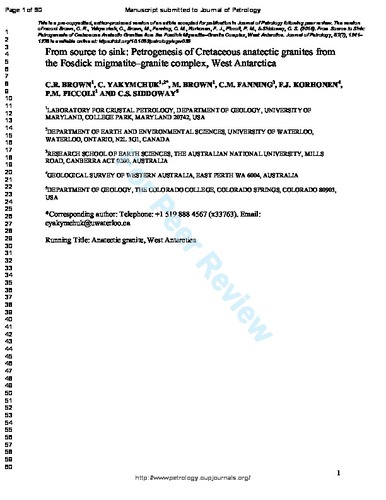 Anatectic granites from the Fosdick migmatite-granite complex yield U-Pb zircon crystallization ages that range from 115 to 100Ma, with a dominant grouping at 107-100 Ma, which corresponds to the timing of dome formation during the regional oblique extension that facilitated exhumation of the complex. The occurrence of leucosome-bearing normal-sense shear zones inmigmatitic gneisses indicates that suprasolidus conditions in the crust continued into the early stages of doming and exhumation of the complex. The structure allows access to variably oriented granites in networks of dykes at deeper structural levels and subhorizontal sheeted granites at shallower structural levels within the complex. This feature allows an evaluation of the mechanisms that modify the composition of granite melts in their source and of granite magmas during their ascent and emplacement using whole-rock major, trace element and Sr and Nd isotope compositions, zircon Hf and O isotope compositions, and phase equilibria modelling of potential source rocks. Geochemical variability within the granites is attributed to source heterogeneity and blending of melts, which themselves are consistent with derivation from regional metasedimentary and metaplutonic source materials. The granites typically contain coarse blocky K-feldspar and/or plagioclase grains within interstitial quartz, and have low Rb/Sr ratios and large positive Eu anomalies. These features are inconsistent with the composition of primary crustal melts derived from metasedimentary and metaplutonic source materials, but consistent with early fractional crystallization of feldspar and subsequent drainage of the fractionated melt. Processes such as peritectic mineral entrainment and accessory mineral dissolution, entrainment and crystallization did not have any significant influence on the major and trace element composition of the granites. The granites in the networks of dykes are interpreted to represent choking of magma transport channels through the middle crust as the rate of magma flow declined during doming and exhumation, whereas the sheeted granites record collapse of subhorizontal, partially crystallized layers of magma by filter pressing and melt exfiltration during vertical shortening associated with doming and exhumation. These processes separated feldspar-rich residues from evolved melt. Based on the results of this study, caution is urged in estimating melt proportion from the volume of granite retained in migmatitic gneiss domes, as the granites may not represent liquid compositions.