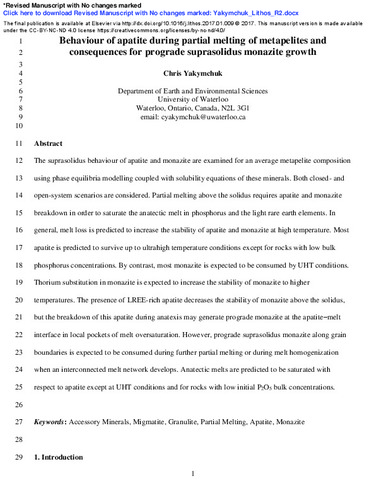 The suprasolidus behaviour of apatite and monazite is examined for an average metapelite composition using phase equilibria modelling coupled with solubility equations of these minerals. Both closed- and open-system scenarios are considered. Partial melting above the solidus requires apatite and monazite breakdown in order to saturate the anatectic melt in phosphorus and the light rare earth elements. In general, melt loss is predicted to increase the stability of apatite and monazite at high temperature. Most apatite is predicted to survive up to ultrahigh temperature conditions except for rocks with low bulk phosphorus concentrations. By contrast, most monazite is expected to be consumed by UHT conditions. Thorium substitution in monazite is expected to increase the stability of monazite to higher temperatures. The presence of LREE-rich apatite decreases the stability of monazite above the solidus, but the breakdown of this apatite during anatexis may generate prograde monazite at the apatite-melt interface in local pockets of melt oversaturation. However, prograde suprasolidus monazite along grain boundaries is expected to be consumed during further partial melting or during melt homogenization when an interconnected melt network develops. Anatectic melts are predicted to be saturated with respect to apatite except at UHT conditions and for rocks with low initial P2O5 bulk concentrations.