Variations on Acoustophoretic Microchannels: From the Facile to the Highly Capable 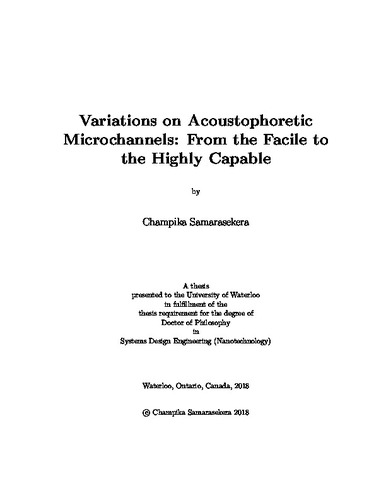 The lab-on-a-chip toolkit is replete with techniques for microparticle manipulation. The use of ultrasonic waves to impart forces on particles, referred to as acoustophoresis, is one particularly powerful yet gentle option. Traditionally, piezoelectric transducers have been coupled with acoustic resonators in order to sustain standing waves for aggregating, sorting, and sensing applications. However, there are several drawbacks to these setups. First, the construction techniques underpinning resonators tend to be expensive and laborious. Secondly, the acoustic impedance of piezoelectric transducers is much higher than the aqueous medium in which microparticles are suspended. This requires the use of impedance-matching layers to adequately couple acoustic energy into the medium. Finally, piezoelectric materials tend to be incompatible with traditional fabrication methods for microelectromechanical systems (MEMS). This can significantly impact the use of piezoelectric materials in more complex lab-on-a-chip type platforms where many processes beyond sample manipulation may be necessary. Over the past two decades, another type of transducer, known as the capacitive micromachined ultrasonic transducer (CMUT), has been challenging the dominance of the piezotransducer. However, this competition has been occurring primarily in the arenas of non-destructive testing and medical imaging. Given some of the unique attributes of CMUTs, it is surprising that they have yet to be fully realized in acoustophoresis, especially because acoustophoresis is popularly practiced within a microfluidic setting. We first present a highly cost-effective and cleanroom-free technique for prototyping piezo-equipped, transversal acoustophoretic resonators. Simple bifurcation and trifurcation microchannels suitable for acoustophoresis in microscopy applications are fabricated and demonstrated. The second focus of our research looks at the suitability of CMUT microarrays as platforms for acoustophoresis. We address the following: issues surrounding their implementation; modeling of potential resonator designs; and possibility of foregoing resonators altogether. Several CMUT devices are then fabricated and tested, using travelling-wave ultrasound to demonstrate aggregation within droplets as well as sequential capture and separation within flows. A unique phenomenon of bead aggregate palpation is encountered, the physical underpinnings of which are attributed to magnitude changes in lateral gradient forces with frequency. Finally, we attempt to perform standing wave manipulations of particles using the CMUT microarray, and describe the difficulties encountered in doing so.

Champika Samarasekera (2018). Variations on Acoustophoretic Microchannels: From the Facile to the Highly Capable. UWSpace. http://hdl.handle.net/10012/13367