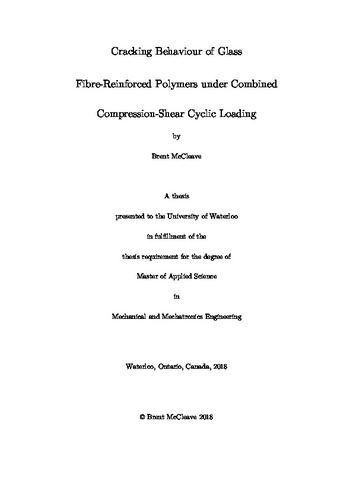 A ply-level investigation into the cracking behaviour of E-glass/epoxy laminates under cyclic multiaxial loading was performed. Two laminate types were subjected to combined transverse compression-shear loading: multidirectional laminates with generalized layups [0₂/θ₂/0₂/-θ₂]S and tubular laminates with layup [0F/90]S. Unidirectional and woven prepregs were obtained from Composite Materials Italy and manufactured into panels and cylinders at the National Research Council in Ottawa, Ontario, Canada. A series of quasistatic tests were performed to determine the in-plane strengths and elastic constants of the unidirectional lamina. From these data, multidirectional laminates [0₂/θ₂/0₂/-θ₂]S were designed such that their off-axis plies (θ, -θ) experience identical biaxial states of stress as the transverse plies (90°) in the tubes by virtue of shear extension coupling. Standard practises for specimen preparation and experimental setup were developed during this investigation. A method for preparing tubular specimens to prevent the application of bending loads during testing was established, along with the design and machining of fixtures for the same. Additionally, a method for visualizing the entire surface of the tubular specimens for crack initiation measurements was developed. Three ratios of ply-level shear stress to transverse compressive stress were considered (0.00, 0.21, 0.40), each being studied between 60% and 80% of the nominal ultimate transverse compressive strength of the ply. Measurements of crack initiation (i.e. ply failure) lifetime were obtained by in situ optical visualization, wherein lighting apparatus were used to highlight sub-critical cracks within the semi-transparent composite specimens. Several qualitative conclusions were established in this investigation. First and foremost, it was demonstrated that sub-critical cracks can be observed in compression-compression fatigue, and that the visibility of the cracks varies with the magnitudes of the combined load and torque. This contrasts with initial conjecture that compressed cracks would be invisible. Similarly, experimental results demonstrated that the stiffness of a laminate with compression cracks decreased over the lifetime of the specimen. Stress-life data indicated that as with tension-shear loading, the increasing presence of shear stress in compression-shear loading noticeably decreases the lifetime of a ply. It was also observed in initial tests that the combination of a multiaxial compressive stress state and the in situ constraining effects of adjacent plies within a laminate can increase the in situ transverse compressive strength and shear strength of a ply beyond is theoretical value by more than 50%. Delays and experimental complications have prevented this investigation from being concluded presently, however the standard practises established in this investigation will aid the efforts by additional contributors to accomplish its objectives more quantitatively. The additional work required comprises two elements: the additional testing of specimens to obtain ply failure data and laminate stiffness degradation data, and the comparison of data obtained from the two different specimen types.