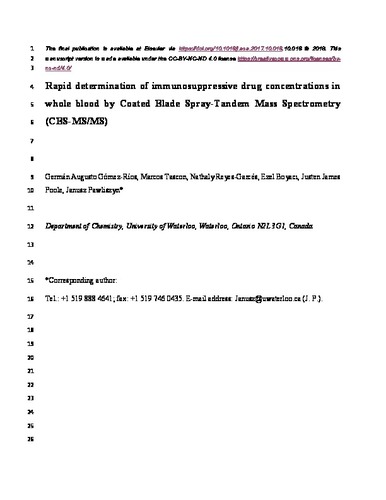 Coated Blade Spray (CBS) is a technology that efficiently integrates sample preparation and direct coupling to mass spectrometry (MS) on a single device. In this article, we present CBS-tandem mass spectrometry (CBS-MS/MS) as a novel tool for the rapid and simultaneous determination of four commonly used immunosuppressive drugs (ISDs) in whole blood: tacrolimus (TAC) and cyclosporine-A (CycA), which are calcineurin inhibitors; and sirolimus (SIR) and everolimus (EVR), which are both mTOR (mechanistic target of rapamycin) inhibitors. Given that CBS extracts via free concentration, analytes that are largely bound to plasma proteins or red blood cells provide considerably lower extraction recovery rates. Therefore, we defy the solventless philosophy of SPME-based techniques, like CBS, by performing the analyte-enrichment step via direct immersion in a solvent-modified matrix. The assay was linear within the evaluated range of concentrations (between 1 and 100 ng/mL for EVR/SIR/TAC and 10–1000 ng/mL for CycA), and the limits of quantification were determined to be 10 ng/mL for CycA and 1 ng/mL for EVR/SIR/TAC. Good accuracy (87–119%) and linearity (r2 ≥ 0.99) were attained over the evaluated range for all ISDs. Interassay imprecision (CV) determined from incurred sample reanalysis was ≤10% for all ISDs. Our method was validated using Liquichek™ whole blood immunosuppressant quality control (QC) standards purchased from Bio-Rad. Concentrations determined by CBS-MS/MS were inside the range specified by Bio-Rad and within 15% of the expected mean value for all ISDs at all QC levels. Furthermore, the effect of different hematocrit levels (20, 45, and 70%) in the entire calibration range was carefully studied. No statistical differences (RSD ≤ 7%) in the calibration curve slopes of ISDs in blood were observed. CBS offers a simpler workflow than that of traditional methods; it eliminates the need for chromatographic separation and provides a clean extract that allows for long-term MS instrumental operation with minimal maintenance. Additionally, because CBS integrates all analytical steps into one device, it eliminates the risk of instrumental carry-over and can be used as a low-cost disposable device for sample preparation and analysis. Fully-automated sample preparation simplifies the method and allows for total analysis times as short as 3 min with turn-around times of less than 90 min.