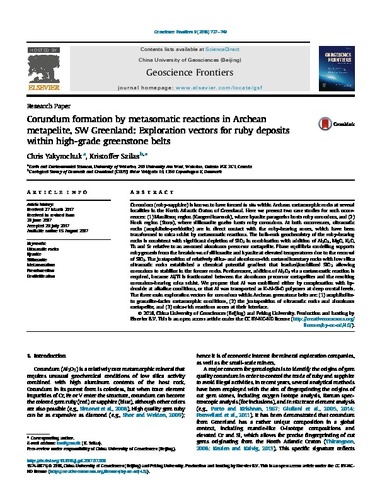 Corundum (ruby-sapphire) is known to have formed in situ within Archean metamorphic rocks at several localities in the North Atlantic Craton of Greenland. Here we present two case studies for such occurrences: (1) Maniitsoq region (Kangerdluarssuk), where kyanite paragneiss hosts ruby corundum, and (2) Nuuk region (Storo), where sillimanite gneiss hosts ruby corundum. At both occurrences, ultramafic rocks (amphibole-peridotite) are in direct contact with the ruby-bearing zones, which have been transformed to mica schist by metasomatic reactions. The bulk-rock geochemistry of the ruby-bearing rocks is consistent with significant depletion of SiO2 in combination with addition of Al2O3, MgO, K2O, Th and Sr relative to an assumed aluminous precursor metapelite. Phase equilibria modelling supports ruby genesis from the breakdown of sillimanite and kyanite at elevated temperatures due to the removal of SiO2. The juxtaposition of relatively silica-and aluminum-rich metasedimentary rocks with low silica ultramafic rocks established a chemical potential gradient that leached/mobilized SiO2 allowing corundum to stabilize in the former rocks. Furthermore, addition of Al2O3 via a metasomatic reaction is required, because Al/Ti is fractionated between the aluminous precursor metapelites and the resulting corundum-bearing mica schist. We propose that Al was mobilized either by complexation with hydroxide at alkaline conditions, or that Al was transported as K-Al-Si-O polymers at deep crustal levels. The three main exploration vectors for corundum within Archean greenstone belts are: (1) amphibolite-to granulite-facies metamorphic conditions, (2) the juxtaposition of ultramafic rocks and aluminous metapelite, and (3) mica-rich reactions zones at their interface.