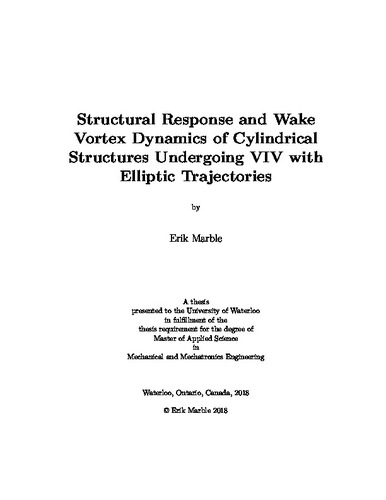 Vortex Induced Vibrations (VIV) of a pivoted circular cylinder were examined through experiments conducted in a water tunnel facility at the University of Calgary. The structural response and wake dynamics of the system were evaluated with the goal of quantitatively describing the attendant fluid-structure interaction. Experiments were performed at a fixed Reynolds number of 3100, a mass ratio of 10.8, and a range of reduced velocities, 4.42<U*<9.05. Laser based displacement sensors and time-resolved, two-component particle image velocimetry (PIV) measurements were used to quantify the structural response and flow development, respectively. The results provide new insight into the fluid-structure interaction for pivoted cylinders, which is of practical engineering interest as this phenomenon is encountered in various civil structures and mechanical devices. For the investigated conditions, the cylinder traces elliptic trajectories, with the experimental conditions producing three out of four possible combinations of orbiting direction and primary axis alignment relative to the incoming flow. The study focuses on the quantitative analysis of wake topology and its relation to this type of structural response. The planar phase-averaged wake topology generally agrees with the Morse and Williamson shedding map for one-degree-of-freedom vortex induced vibrations, with 2S, 2P0, and 2P shedding patterns observed within the range of reduced velocities studied here. A new Eulerian vortex identification, tracking, and strength quantification methodology is developed and applied to analyze the vortex shedding process. In the case of 2S vortex shedding, vortices are shed when the cylinder is approaching the maximum transverse displacement and reaches the streamwise equilibrium. 2P vortices are shed approximately half a period earlier in the cylinder's elliptic trajectory. Leading vortices shed immediately after the peak in transverse oscillation and trailing vortices shed near the equilibrium of transverse oscillation. The orientation and direction of the cylinder's elliptic trajectory are shown to influence the timing of vortex shedding, inducing changes in the 2P wake topology. Three dimensional reconstructions of the phase averaged wake velocity measurements reveal 2S shedding along the span of a stationary cylinder and hybrid shedding for the VIV cases at U*=5.48 and 7.08, with planar wake topology transitioning from 2S to P+S to 2S, and 2S to P+S, respectively. The observed wake topologies show significant deviation from predictions based on the Morse and Williamson shedding map. Examination of the time averaged wake characteristics shows the formation length, wake half-width, and maximum velocity deficit exhibit spanwise trends that support the observed region of wake transition between different shedding regimes. Spectral analysis of the wake velocity indicates cycle-to-cycle variations of the spanwise location of wake topology transition as well as transience in the frequency of vortex shedding.