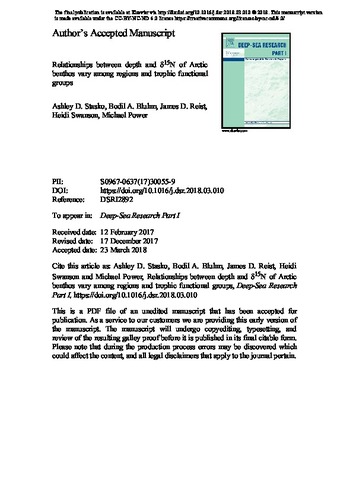 Stable isotope ratios of nitrogen (δ15N) of benthic primary consumers are often significantly related to water depth. This relationship is commonly attributed to preferential uptake of 14N from sinking particulate organic matter (POM) by microbes, and suggests that relationships between δ15N and water depth may be affected by local POM sources and flux dynamics. We examined the relationships between δ15N and water depth (20–500 m) for six trophic functional groups using a mixed effects modelling approach, and compared relationships between two contiguous Arctic marine ecosystems with different POM sources and sinking export dynamics: the Canadian Beaufort Sea and Amundsen Gulf. We demonstrate for the first time in the Arctic that δ15N values of mobile epifaunal carnivores increased as a function of depth when considered separately from benthopelagic and infaunal carnivores, which contrarily did not exhibit increasing δ15N with depth. The δ15N of suspension/filter feeders, infaunal deposit feeders and bulk sediment also increased with water depth, and the slopes of the relationships were steeper in the Amundsen Gulf than in the Beaufort Sea. We propose that regional differences in slopes reflect differences in POM sources exported to the benthos. In the Beaufort Sea, terrestrial POM discharged from the Mackenzie River quantitatively dominates the sedimentary organic matter across the continental shelf and slope, dampening change in δ15N of benthic POM with depth. In the Amundsen Gulf, we attribute a faster rate of change in δ15N of POM with increasing depth to larger contributions of marine-derived POM to the benthic sedimentary pool, which had likely undergone extensive biological transformation in the productive offshore pelagic zone. Differences in POM input regimes among regions should be considered when comparing food webs using stable isotopes, as such differences may impact the rate at which consumer δ15N changes with depth.