Male-female differences in households' resource allocation and decision to seek healthcare in south-eastern Nigeria: Results from a mixed methods study 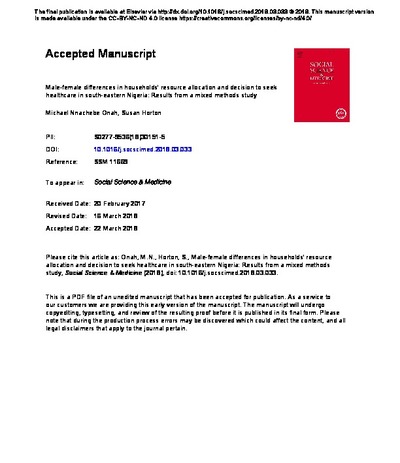 Ability to influence household decision-making has been shown to increase with improved social capital and power and is linked to better access to household financial resources and other services outside the household including healthcare. To examine the male-female differences in household custody of financial resources, decision-making, and type of healthcare utilised, we used a mixed methods approach of cross-sectional household surveys and focus-group discussions (FGDs). Data was collected between 10 January–28 February 2011. We analyzed a sample of 411 households and a sub-sample of 223 households with a currently married head. We conducted six single-sex FGDs in 3 communities (1 urban, 2 rural) among a random sub-sample of participants in the survey. We performed univariate, bivariate, and logistic regression analyses with a 95% confidence interval. For the qualitative data, we performed thematic analysis where broad themes relevant to the research objective were abstracted. In all households and in those with a married head, sick male members were less likely to forgo healthcare (aORall0.87, 95% CI 0.80–0.90; aORmarried0.52, 95% CI 0.18–0.83) and more likely to utilise formal healthcare relative to female sick members (aORall3.36, 95% CI 3.20–3.87; aORmarried19.50, 95% CI 9.62–39.52). Formal healthcare providers are medically trained while informal providers are untrained vendors that dispense medications for profit. There were more reports of sole custody of household resources among men within households with married heads. Joint decision-making on healthcare expenditure improved women's access to healthcare but is not reflective of unhindered access to household financial resources. Qualitatively, women spoke of seeking permission from male household head before expenditure was incurred, while male heads spoke of concealing household financial resources from their spouse. Gender constructs and male-female differences have important effects on household resource allocation and healthcare utilisation.