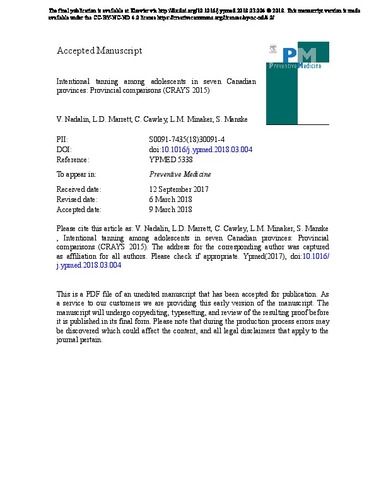 This report explores intentional tanning behaviors among Canadian high school students in light of provincial restrictions on UV tanning device use among youth. Data are from the Cancer Risk Assessment in Youth Survey (CRAYS), collected from January to December 2015, at randomly selected high schools in 7 provinces. Relevant variables were: tanning methods ever used, demographics, and location and refusal of UV tanning device (beds, lamps) use in the past 12 months. Data were weighted so total survey weights by male/female, grade and province equal actual enrolments in these groups. Analyses were conducted in SAS, mostly for grades 10 and 11. Rao-Scott chi squared tests and p-values were calculated. Among 6803 grade 10 and 11 participants, 82% tanned intentionally, mostly by being/playing outside, or laying in the sun. Spray/self-tanners were used by 15% of participants. UV tanning device use was uncommon (4.4%), lowest in Ontario (2.7%) and British Columbia (3.8%), which have legislation against use among youth. Of 202 who used UV tanning devices in the past 12 months, most did at salons/studios (85%), 35% at home and 30% at a gym. Two hundred and forty-nine participants (3.4%) were refused use of UV tanning devices in the past 12 months. While legislation appears to deter UV tanning device use, it appears to have no impact on UV exposure among high school students overall. Greater prevention efforts are required to deter intentional tanning among high school students.