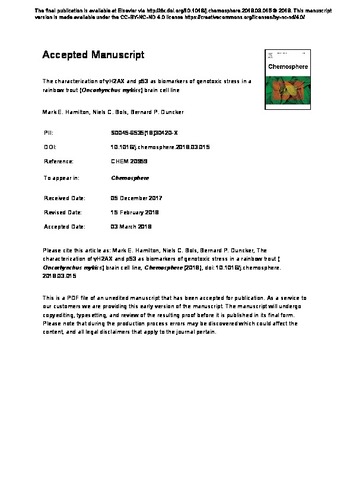 Rainbow trout cell cultures were exposed to three genotoxicants and examined for effects on γH2AX and p53 levels by western blotting and on cell viability using the indicator dyes Alamar Blue (AB) for energy metabolism and 5'-carboxyfluorescein diacetate acetoxymethyl ester (CFDA-AM) for plasma membrane integrity. Bleomycin induced γH2AX and p53 in a dose- and time-dependent manner and had little cytotoxic effect. However, induction was first seen at 0.3 μM for γH2AX but not until 16.5 μM for p53. Methyl methanesulfonate (MMS) increased H2AX phosphorylation but diminished p53 levels as the dose was increased from 908 μM up to 2724 μM. Over this dose range cell viability was progressively lost. 4-nitroquinoline N-oxide (NQO) induced both γH2AX and p53, beginning at 62.5 nM, which was also the concentration at which cell viability began to decline. As the NQO concentration increased further, elevated γH2AX was detected at up to 2.0 μM, while p53 was elevated up to 1.0 μM. Therefore, H2AX phosphorylation was superior to p53 levels as a marker of DNA damage caused by genotoxicants that act by introducing double-stranded DNA breaks (bleomycin), alkyl groups (MMS), and quinoline adducts (NQO).