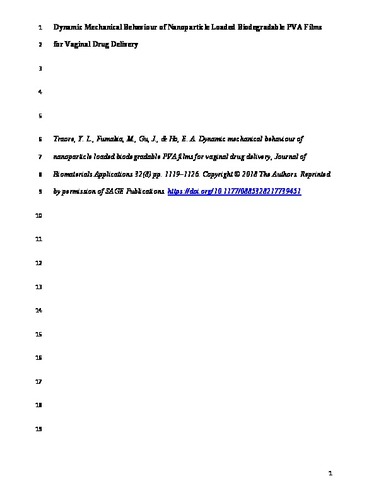 In this study, we investigated the viscoelastic and mechanical behaviour of polyvinyl alcohol films formulated along with carrageenan, plasticizing agents (polyethylene glycol and glycerol), and when loaded with nanoparticles as a model for potential applications as microbicides. The storage modulus, loss modulus and glass transition temperature were determined using a dynamic mechanical analyzer. Films fabricated from 2% to 5% polyvinyl alcohol containing 3 mg or 5 mg of fluorescently labeled nanoparticles were evaluated. The storage modulus and loss modulus values of blank films were shown to be higher than the nanoparticle-loaded films. Glass transition temperature determined using the storage modulus, and loss modulus was between 40–50℃ and 35–40℃, respectively. The tensile properties evaluated showed that 2% polyvinyl alcohol films were more elastic but less resistant to breaking compared to 5% polyvinyl alcohol films (2% films break around 1 N load and 5% films break around 7 N load). To our knowledge, this is the first study to evaluate the influence of nanoparticle and film composition on the physico-mechanical properties of polymeric films for vaginal drug delivery.