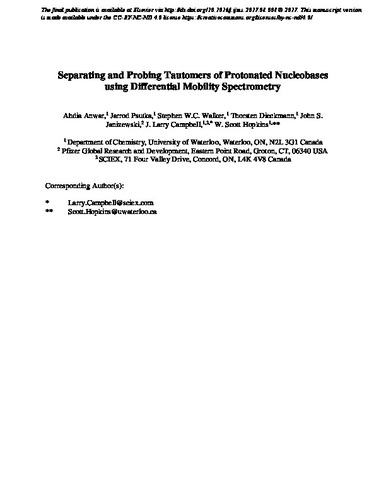 The protonated nucleobases (C+H)+, (T+H)+, (U+H)+, (A+H)+, and (G+H)+ are investigated in a combined experimental and computational study using differential mobility spectrometry (DMS), mass spectrometry, and electronic structure calculations. DMS is used to isolate individual tautomeric forms for each protonated nucleobase prior to characterization with HDX or CID. The population distributions of each protonated nucleobase formed by electrospray ionization (ESI) are dominated by a single tautomeric form, as is predicted by our calculations. However, all nucleobases present additional tautomers upon ESI, with these minor contributions to the ensemble populations attributed to additional higher energy metastable species. In addition to the tautomer-derived species, additional ion signals in the DMS data are attributed to larger nucleobase-containing clusters, which fragment post-DMS to yield bare ion and fragment ion signals that are consistent with those expected for the bare protonated nucleobases. Contributions from larger clustered species are instead distinguished by monitoring DMS ion signal as declustering potential voltages are ramped.