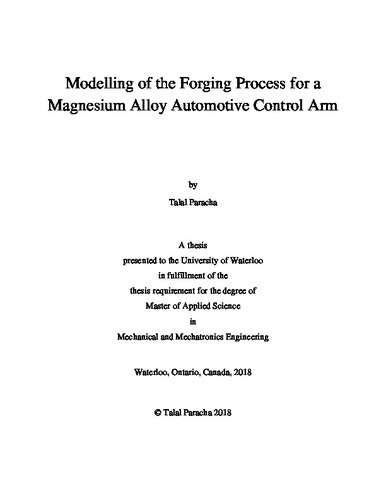 The automotive industry has placed significant emphasis on weight reduction to achieve better fuel economy while maintaining safety and quality standards. One way this can be achieved is by using forged magnesium alloys due to their high stiffness- and strength-to-weight ratios. In order to assess the feasibility of forging magnesium alloys into a complex automotive component, numerical simulation using the commercial Finite Element (FE) package DEFORM 3D was performed and verified. For this study, two magnesium alloys AZ80 & ZK60 in extruded forms were considered. Key material parameters required for input into DEFORM 3D included material flow stress data as a function of temperature, strain rate and strain. This data was extracted from flow curves which were developed by others in this research group using uniaxial hot compression tests of the as-cast and extruded starting material. Since magnesium has a Hexagonal Close Packed (HCP) crystal structure with limited slip systems which are activated under different deformation conditions, it was determined that anisotropy which is induced through the processes such as rolling, extrusion and forging plays an important role during deformation. As a result, Hill’s anisotropic material model available in DEFORM 3D was used. Hill’s anisotropic material model requires a strain rate sensitive flow curve for each temperature in addition to 6 anisotropic coefficients. Anisotropic coefficients were generated using measured compression and shear yield strength in the extruded starting material. Shear hat tests were performed at strain rates of 0.1/s and 1/s at multiple temperatures for AZ80 & ZK60 alloys. After the simulation was complete and verified, multiple parametric and sensitivity studies were performed to determine the effect of factors such as flash land, friction, temperature and ram speed on the predicted forging load and material flow. It was determined that increasing the flash width will increase the press load while decreasing it too much will result in under-fill in the die cavity. It was determined that a flash width of 5 mm created a good balance to achieve a complete die fill while minimizing the forging load for this application. Friction plays a similar role as flash land: increasing it increases the load while reducing it too much results in under-fill. A friction factor of 0.2 was used based on testing with the friction modifier used in subsequent testing. Multiple preform shapes were examined to ensure the final geometry for the control arm could be achieved in one forging step using the CanmetMATERIALS 1500 tonne press. The preform shapes studied included a multi-section cylindrical, flat plate and bend cylindrical billet. The bent cylindrical billet was selected as it met all the project requirements.