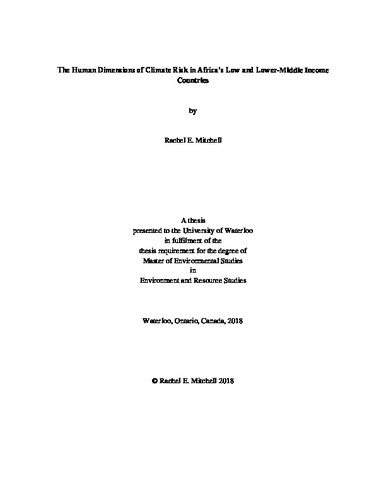 Climate change impacts are a result of the intersection between the level of climate change, and the socioeconomic conditions that characterize the locale under question. For the low income countries in the world, they face a heightened risk to climate change impacts, as a result of their low development status that increases their vulnerability and exposure. The Low and Lower-Middle Income countries in Africa are some of the most underdeveloped in the world. Their high population, limited access to sanitation, low income and low educational attainment stifle development and fuel the demographic trap. These socioeconomic conditions determine development outcomes and characterize the human dimensions of climate risk. This thesis focused on the socioeconomic processes to the human dimensions of climate risk in the Low and Lower-Middle Income countries in Africa. This research used a set of 11 socioeconomic conditions, specific to low income and lower-middle income countries, and analyzed the direct and indirect influence patterns between the socioeconomic elements. Cross Impact Balance Analysis was used to analyze and evaluate these influences and generate plausible future scenarios based on combinations of socioeconomic conditions at high, medium, or low states. The objective of the analysis was to determine what plausible combinations of socioeconomic conditions are required for favourable future development, and what levels of these conditions can pull Africa out of the demographic trap, and onto a path of sustained development. The analysis generated 9 plausible future scenarios. These scenarios describe future development pathways that range from the status quo demographic trap that many African countries currently face, to a future scenario of sustainable development by the end of the century. The vulnerability to climate change was reduced along this trajectory, with lower challenges to adaptation in high income scenarios, compared to high exposure and vulnerability in low income future scenarios. By analyzing the scenarios in the context of the development continuum, each outcome was evaluated based on their promotion or hindrance to development and income growth, focusing on hidden variables that promote progress in key areas. The results showed the importance of sanitation, healthcare, poverty reduction, and education to promoting economic growth and development. Sanitation emerged as a hidden variable to development success for its vital role in promoting gender parity in educational attainment, as well as supporting good health in the population. While education was one of the most influential descriptors, its ability to exert positive force was controlled by the level of sanitation, a key determinant to its progress. By studying potential future conditions, we are better able to understand areas for prioritization today to chart a course of sustainable development for tomorrow.