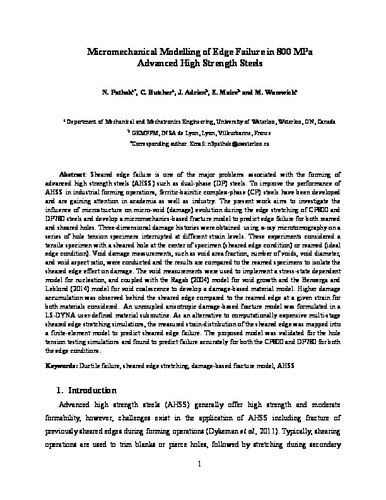 Sheared edge failure is one of the major problems associated with the forming of advanced high strength steels (AHSS) such as dual-phase (DP) steels. To improve the performance of AHSS in industrial forming operations, ferritic-bainitic complex-phase (CP) steels have been developed and are gaining attention in academia as well as industry. The present work aims to investigate the influence of microstructure on micro-void (damage) evolution during the edge stretching of CP800 and DP780 steels and develop a micromechanics-based fracture model to predict edge failure for both reamed and sheared holes. Three-dimensional damage histories were obtained using x-ray microtomography on a series of hole tension specimens interrupted at different strain levels. These experiments considered a tensile specimen with a sheared hole at the center of specimen (sheared edge condition) or reamed (ideal edge condition). Void damage measurements, such as void area fraction, number of voids, void diameter, and void aspect ratio, were conducted and the results are compared to the reamed specimens to isolate the sheared edge effect on damage. The void measurements were used to implement a stress-state dependent model for nucleation, and coupled with the Ragab (2004) model for void growth and the Benzerga and Leblond (2014) model for void coalescence to develop a damage-based material model. Higher damage accumulation was observed behind the sheared edge compared to the reamed edge at a given strain for both materials considered. An uncoupled anisotropic damage-based fracture model was formulated in a LS-DYNA user-defined material subroutine. As an alternative to computationally expensive multi-stage sheared edge stretching simulations, the measured strain-distribution of the sheared edge was mapped into a finite-element model to predict sheared edge failure. The proposed model was validated for the hole tension testing simulations and found to predict failure accurately for both the CP800 and DP780 for both the edge conditions.