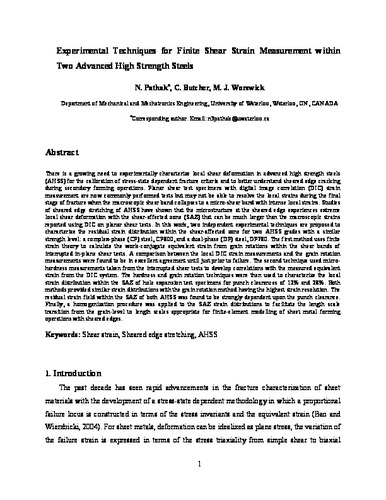 There is a growing need to experimentally characterize local shear deformation in advanced high strength steels (AHSS) for the calibration of stress-state dependent fracture criteria and to better understand sheared edge cracking during secondary forming operations. Planar shear test specimens with digital image correlation (DIC) strain measurement are now commonly performed tests but may not be able to resolve the local strains during the final stage of fracture when the macroscopic shear band collapses to a micro-shear band with intense local strains. Studies of sheared edge stretching of AHSS have shown that the microstructure at the sheared edge experiences extreme local shear deformation with the shear-affected zone (SAZ) that can be much larger than the macroscopic strains reported using DIC on planar shear tests. In this work, two independent experimental techniques are proposed to characterize the residual strain distribution within the shear-affected zone for two AHSS grades with a similar strength level: a complex-phase (CP) steel, CP800, and a dual-phase (DP) steel, DP780. The first method uses finite strain theory to calculate the work-conjugate equivalent strain from grain rotations within the shear bands of interrupted in-plane shear tests. A comparison between the local DIC strain measurements and the grain rotation measurements were found to be in excellent agreement until just prior to failure. The second technique used micro-hardness measurements taken from the interrupted shear tests to develop correlations with the measured equivalent strain from the DIC system. The hardness and grain rotation techniques were then used to characterize the local strain distribution within the SAZ of hole expansion test specimens for punch clearances of 12% and 28%. Both methods provided similar strain distributions with the grain rotation method having the highest strain resolution. The residual strain field within the SAZ of both AHSS was found to be strongly dependent upon the punch clearance. Finally, a homogenization procedure was applied to the SAZ strain distributions to facilitate the length scale transition from the grain-level to length scales appropriate for finite-element modelling of sheet metal forming operations with sheared edges.