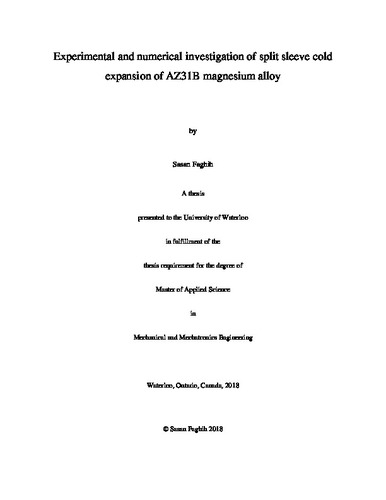 The serious pollution problem caused by transportation can cause critical environmental effect such as global warming. This has drawn attention towards lighter materials for use in the transportation industry. Magnesium as the lightest structural metal has been very attractive for both researchers and industry. Use of magnesium in the transportation industry for non-structural components goes back to the 1930’s, but recently it has been under investigation for load bearing component, in which they are exposed to cyclic loading and therefore are subject to fatigue failure. Cold expansion is one of the well-known techniques for enhancing the fatigue properties notched specimen, which is used widely in aerospace. For the first time, the feasibility of performing cold expansion on commercial AZ31B magnesium sheet is studied in this research and presented herein. Optimizing the process from the fatigue point of view is done. In order to model the process, a numerical method called variable material property (VMP), with capability of considering actual material behavior, and a finite element software, ABAQUS, were used. To verify these models, two experimental measurements have been done, using digital image correlation (DIC) technique to capture the radial displacement around the notch during loading, and residual stress measurement by X-ray diffraction method after unloading. To obtain the material behavior needed in VMP method, tension-compression and compression-tension loading-unloading tests were performed on the material. It was shown that split sleeve cold expansion can significantly improve the fatigue life, by postponing crack initiation and decreasing the rate of crack propagation, compared with as-received notched sample. The fatigue life improvement factor gets higher in high cycle regime. In low cycle fatigue, the improvement factor is roughly 2.5x, while in high cycle it gets up to an order of magnitude. It was also shown that the optimum degree of cold expansion percentage was 5 % and 6% for 4 mm and 3.18 mm sheet, respectively. The effect of cold expansion on crack initiation and propagation life was examined using DIC technique. Fractography revealed that on untreated samples, crack initiation occurred on the notch surface, while in the samples with the optimum degree of cold expansion the crack initiation occurs internally and away from the notch surface. This has been attributed to the residual stresses induced in cold expansion process.