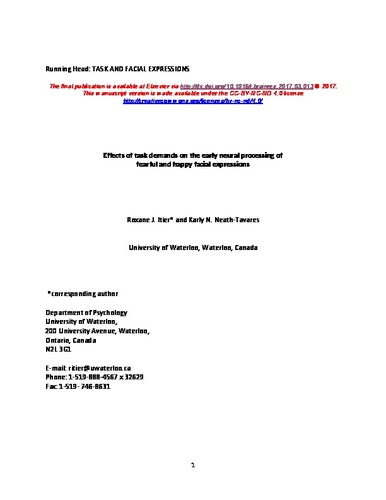 Task demands shape how we process environmental stimuli but their impact on the early neural processing of facial expressions remains unclear. In a within-subject design, ERPs were recorded to the same fearful, happy and neutral facial expressions presented during a gender discrimination, an explicit emotion discrimination and an oddball detection tasks, the most studied tasks in the field. Using an eye tracker, fixation on the face nose was enforced using a gaze-contingent presentation. Task demands modulated amplitudes from 200 to 350ms at occipito-temporal sites spanning the EPN component. Amplitudes were more negative for fearful than neutral expressions starting on N170 from 150 to 350ms, with a temporo-occipital distribution, whereas no clear effect of happy expressions was seen. Task and emotion effects never interacted in any time window or for the ERP components analyzed (P1, N170, EPN). Thus, whether emotion is explicitly discriminated or irrelevant for the task at hand, neural correlates of fearful and happy facial expressions seem immune to these task demands during the first 350ms of visual processing.