Analysis of a brownfield management conflict in Canada 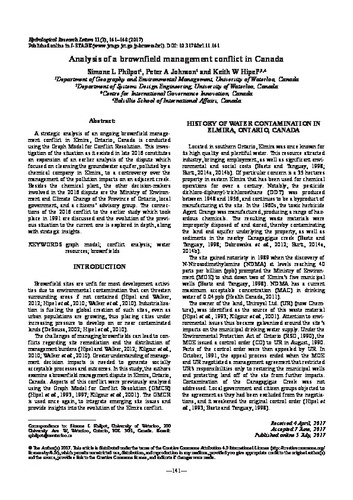 A strategic analysis of an ongoing brownfield management conflict in Elmira, Ontario, Canada is conducted using the Graph Model for Conflict Resolution. This investigation of the situation as it existed in late 2016 constitutes an expansion of an earlier analysis of the dispute which focused on cleansing the groundwater aquifer, polluted by a chemical company in Elmira, to a controversy over the management of the pollution impacts on an adjacent creek. Besides the chemical plant, the other decision-makers involved in the 2016 dispute are the Ministry of Environment and Climate Change of the Province of Ontario, local government, and a citizens' advisory group. The connections of the 2016 conflict to the earlier study which took place in 1991 are discussed and the evolution of the previous situation to the current one is explored in depth, along with strategic insights.