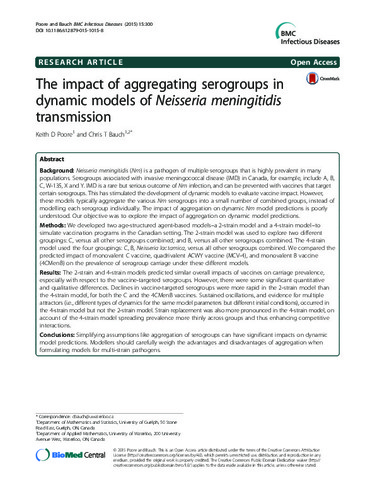 Background: Neisseria meningitidis (Nm) is a pathogen of multiple serogroups that is highly prevalent in many populations. Serogroups associated with invasive meningococcal disease (IMD) in Canada, for example, include A, B, C, W-135, X and Y. IMD is a rare but serious outcome of Nm infection, and can be prevented with vaccines that target certain serogroups. This has stimulated the development of dynamic models to evaluate vaccine impact. However, these models typically aggregate the various Nm serogroups into a small number of combined groups, instead of modelling each serogroup individually. The impact of aggregation on dynamic Nm model predictions is poorly understood. Our objective was to explore the impact of aggregation on dynamic model predictions. Methods: We developed two age-structured agent-based models-a 2-strain model and a 4-strain model-to simulate vaccination programs in the Canadian setting. The 2-strain model was used to explore two different groupings: C, versus all other serogroups combined; and B, versus all other serogroups combined. The 4-strain model used the four groupings: C, B, Neisseria lactamica, versus all other serogroups combined. We compared the predicted impact of monovalent C vaccine, quadrivalent ACWY vaccine (MCV-4), and monovalent B vaccine (4CMenB) on the prevalence of serogroup carriage under these different models. Results: The 2-strain and 4-strain models predicted similar overall impacts of vaccines on carriage prevalence, especially with respect to the vaccine-targeted serogroups. However, there were some significant quantitative and qualitative differences. Declines in vaccine-targeted serogroups were more rapid in the 2-strain model than the 4-strain model, for both the C and the 4CMenB vaccines. Sustained oscillations, and evidence for multiple attractors (i.e., different types of dynamics for the same model parameters but different initial conditions), occurred in the 4-strain model but not the 2-strain model. Strain replacement was also more pronounced in the 4-strain model, on account of the 4-strain model spreading prevalence more thinly across groups and thus enhancing competitive interactions. Conclusions: Simplifying assumptions like aggregation of serogroups can have significant impacts on dynamic model predictions. Modellers should carefully weigh the advantages and disadvantages of aggregation when formulating models for multi-strain pathogens.