Cost-Effectiveness Evaluation Of Quadrivalent Influenza Vaccines For Seasonal Influenza Prevention: A Dynamic Modeling Study Of Canada And The United Kingdom 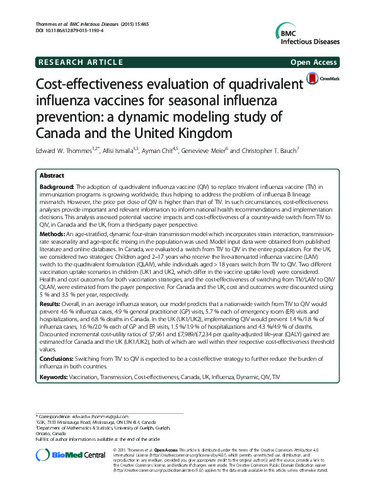 Background: The adoption of quadrivalent influenza vaccine (QIV) to replace trivalent influenza vaccine (TIV) in immunization programs is growing worldwide, thus helping to address the problem of influenza B lineage mismatch. However, the price per dose of QIV is higher than that of TIV. In such circumstances, cost-effectiveness analyses provide important and relevant information to inform national health recommendations and implementation decisions. This analysis assessed potential vaccine impacts and cost-effectiveness of a country-wide switch from TIV to QIV, in Canada and the UK, from a third-party payer perspective. Methods: An age-stratified, dynamic four-strain transmission model which incorporates strain interaction, transmission-rate seasonality and age-specific mixing in the population was used. Model input data were obtained from published literature and online databases. In Canada, we evaluated a switch from TIV to QIV in the entire population. For the UK, we considered two strategies: Children aged 2-17 years who receive the live-attenuated influenza vaccine (LAIV) switch to the quadrivalent formulation (QLAIV), while individuals aged > 18 years switch from TIV to QIV. Two different vaccination uptake scenarios in children (UK1 and UK2, which differ in the vaccine uptake level) were considered. Health and cost outcomes for both vaccination strategies, and the cost-effectiveness of switching from TIV/LAIV to QIV/QLAIV, were estimated from the payer perspective. For Canada and the UK, cost and outcomes were discounted using 5 % and 3.5 % per year, respectively. Results: Overall, in an average influenza season, our model predicts that a nationwide switch from TIV to QIV would prevent 4.6 % influenza cases, 4.9 % general practitioner (GP) visits, 5.7 % each of emergency room (ER) visits and hospitalizations, and 6.8 % deaths in Canada. In the UK (UK1/UK2), implementing QIV would prevent 1.4 %/1.8 % of influenza cases, 1.6 %/2.0 % each of GP and ER visits, 1.5 %/1.9 % of hospitalizations and 4.3 %/4.9 % of deaths. Discounted incremental cost-utility ratios of $7,961 and 7,989 pound/7,234 pound per quality-adjusted life-year (QALY) gained are estimated for Canada and the UK (UK1/UK2), both of which are well within their respective cost-effectiveness threshold values. Conclusions: Switching from TIV to QIV is expected to be a cost-effective strategy to further reduce the burden of influenza in both countries.